Russia has provided more details on the previously announced sanctions against Turkey. Different foods from Turkey will no longer be allowed to cross the border to Russia. The list, according to various sources, includes tomatoes, cucumbers, onions, oranges, grapes, apples, peaches, apricots, nectarines, plums, strawberries and mandarins. There are also talks about broccoli and cauliflower. The boycott will be imposed from 1 January, so that the market can prepare for the closed borders.
During the meeting that served to provide greater clarity about the sanctions, Deputy Prime Minister Igor Shuvalov said: "With regard to Turkish products, we have looked at instances of Turkish exports with a significant share, but whose ban will not harm Russian consumers. We will replace those with either our own production or with imports from other countries. This will contribute to the substitution of imports and help our producers, particularly growers of fruit and vegetables." 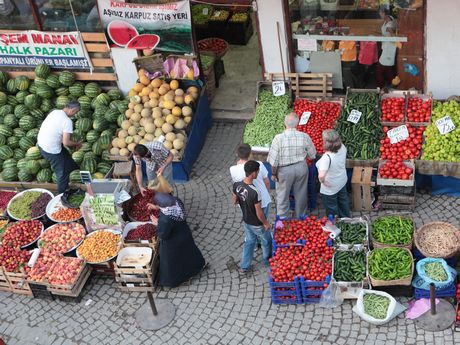 New suppliers
The government pointed to several countries that have already shown interest in replacing Turkish products, such as Egypt. The Egyptian Minister of Foreign Trade and Industry said last Sunday already that "Egypt is interested in fulfilling the demand of Russian consumers, especially for Turkish products, given Russia's decision to stop importing from Turkey." According to experts, Egypt would not be able to fill the resulting gap.
Armenia sees opportunities now that Turkish products will be banned. The country is expected to benefit from the strong demand during the holidays. According to the government, there are already plans to increase the export volume. Both Morocco and Israel have also been mentioned as possible alternatives to Turkey.
Shortages expected
Russian retailers now have a transition period to find new suppliers, as of 1 January 2016 the borders will close to Turkish products. In any case, the Economic Development Minister, Alexei Ulyukayev, warned of shortages in the short term. "We need time; it is impossible to rule out the possibility of short-term shortages; however, we think that the situation, in general, can be properly managed." The most problems will likely be registered with citrus fruits and tomatoes, since Turkey was a major supplier of these products.
Based on information from a newspaper, the Russian news service TASS reported that the boycott could cause a loss of US$ 150 million for Turkey. A total of about 190,000 tonnes of fruit and vegetables could not be delivered to Russia. The Turkish market cannot absorb this volume, therefore, prices should fall.
Turkey hit hard
Other Russian media write about impending payment problems among Turkish exporters now that the border is closed. Exports this year were already lower than in 2014. The Turkish prime minister has called all trucks that are waiting at the border with Russia to return. Turkey thus hopes to have the fruits and vegetables back in time to ship them to other markets.
Ukraine also expects to benefit from a trade war between the two countries. Closed borders would reduce prices in Ukraine. According to Ukrainian media, the first effects can already be seen in, for example, mandarin prices. Around the turn of the year, the prices for cucumbers, tomatoes, pomegranates, grapes and citrus are expected to drop.