Round table discussion on sustainable foods in Peru

Last Friday, 27 November, the Sustainable Food Event was held in Amsterdam. At the event, organised by the Trade Commission of Peru and the CBI, Peruvian and Dutch companies had a chance to meet and establish contacts.
Afterwards, a round table discussion was held covering various issues, such as what is sustainability and how it can be achieved. All participants gave the impression of being willing to work towards greater sustainability, although the debate also quite clearly revealed different views on how to reach that goal. In addition to fresh fruits and vegetables, the event also covered other sectors, such as cocoa and coffee. Four specialists participated in the panel discussion: José Cubero (Fairtrasa), Yvette Faber (NGO Solidarity Europe), Gastón Vizcarra (Candela) and María del Pilar Alarcón (PromPeru) via Skype. The participants introduced themselves and the company or organization to which they belonged and outlined their role in achieving sustainability. The public had an active role in the debate, as they were given a chance to ask the specialists some questions and also to express their opinions. 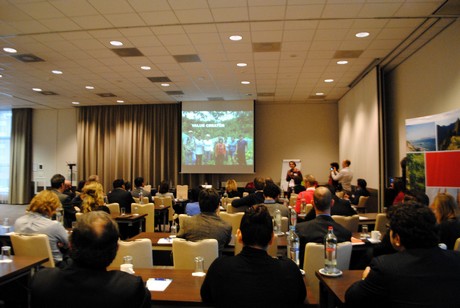 A "simple" question, such as what the word sustainability means, revealed a diversity of opinions among the public and specialists. José Cubero, for example, said that it could mean start doing something now and continue doing so in this manner for the next twenty years. Others spoke of self-sufficiency or of being able to cover all costs. A more intense debate was sparked from the question relating to what needs to change in order to bring more sustainable products to the shelves. There were those who believe consumers need to change their mentality, while others felt that it all starts in supermarkets, which should offer a wider range of sustainable products. Likewise, some participants pointed out that with their power and promotion budget, supermarkets do have the ability to make a difference.
Everyone learned something at this event, coming to the conclusion that it is impossible to have a perfect world; that creating a more sustainable market must start at home, with everyone playing a part to make real changes happen; or that sustainability is an on-going business that is in the heart, and not in a certificate. Most participants attended at least a few meetings and useful discussions and many of them are really considering doing business with new contacts.