Over the first seven months of this year, Germany imported 12% fewer fresh fruits and vegetables than in 2021's first seven months. The negative difference was slightly larger than the same period in 2020. In value terms, this July's imports were worth less than in July last year, €7.65 billion versus €7.80 billion.

These include Morocco +16%, South Africa +10%, Peru +8% and Portugal +16%. Incidentally, German imports from South Africa and Peru are mostly re-exports via the Netherlands. The figures presented in this analysis are sourced from the German Federal Statistical Office (SBA), which uses the production country. That is in contrast to Eurostat, which uses the country of origin ("last port"). 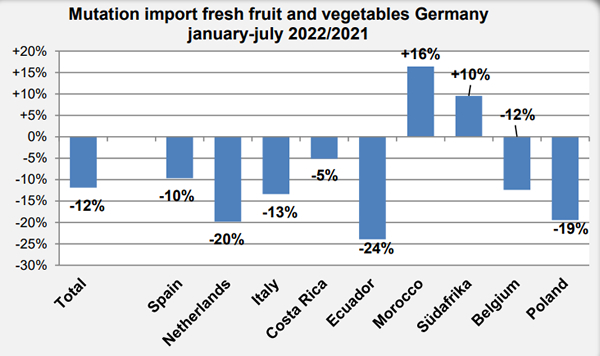 Less imported of just about everything
German imports of all the important products fell during the first seven months of this year, including July. Bananas are Germany's top fresh fruit and vegetable import product. In July, these imports decreased by 12%, and over 2022's first seven months, there was a nine percent decline.