"In times of high dependence on energy imports, our model is exemplary"

Gemüsebau Steiner from the Upper Bavarian district of Altötting has received the German Innovation Award for Horticulture for its innovative sustainability concept. Since 2014, the company has been producing almost 10,000 tons of tomatoes, peppers, cucumbers, and strawberries annually on some 33 hectares, both conventionally and organically, for the REWE and Penny retail brands. Parliamentary State Secretary Dr. Manuela Rottmann presented the award at the German Horticulture Day in Erfurt.

Every year, the Federal Ministry of Food and Agriculture awards the Innovation Prize to outstanding and exemplary innovations in horticulture. Gemüsebau Steiner is being honored for its special concept of "sustainability in greenhouse cultivation." This involves largely dispensing with fossil fuels for heating greenhouses, as well as a photovoltaic power supply, energy-saving LED lighting, the replacement of pesticides with natural pest control, closed water cycles to avoid unnecessary losses and to recover fertilizers, as well as innovative, resource-saving packaging.

Forward-looking investments in renewable energy
It was clear to the founder of the company Josef Steiner from the very beginning that greenhouse cultivation of vegetables in Central Europe is only sustainable if greenhouses are heated with renewable energy. For this reason, Gemüsebau Steiner actively participated in the development of a heat utilization concept for the geothermal plant in Kirchweidach and is currently drilling another well itself in neighboring Halsbach. Compared to conventional greenhouses, Gemüsebau Steiner's energy concept saves more than 10 million liters of heating oil and thus more than 20,000 tons of CO2 per year.

Compared with the delivery of vegetables from Spain, regional production in Gemüsebau Steiner's greenhouses saves around 1.5 million truck kilometers. This corresponds to an amount of diesel fuel saved of approximately 400,000 liters. 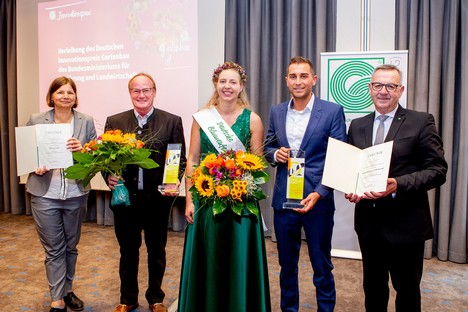 The award was presented on 15 September 2022

Energy and innovation
Gemüsebau Steiner's concept has become a showcase project for German and Central European vegetable production. "Winning the German Innovation Award for Horticulture 2022 fills us with pride, joy, and gratitude. It encourages us to continue to use our energy and innovative strength to protect our environment and keep our planet livable for future generations," said Managing Director Wolfgang Steiner.

"Particularly in times of high dependence on energy imports and its associated risks, our model is exemplary for vegetable farming in Europe and an important step towards the energy turnaround and securing food self-sufficiency."

REWE supports ambitious climate goals
"I am very pleased that our long-standing and highly valued partner Gemüsebau Steiner has won the Innovation Award. As REWE Group, we are also pursuing very ambitious climate goals. Only together can we meet the challenge of climate change and preserve a planet worth living on," said Eugenio Guidoccio, Head of Ultrafresh REWE Group Buying.

"We are proud that Gemüsebau Steiner has received this award. The tomatoes, peppers, and cucumbers from Kirchweidach have many loyal fans among our customers, representing a sustainable range of products from Bavaria for Bavaria," added Volker Hornsteiner, Chairman of the Management Board of REWE Region South.

Social responsibility
In addition to the topics of energy and climate protection, Gemüsebau Steiner places a particular emphasis on social responsibility: there are no seasonal workers; all employees are employed year-round in the company, receiving intensive training, getting paid in line with collective bargaining agreements and having many internal promotion opportunities. This results in mostly long-term and trusted working relationships. In addition, the company supports institutions such as food banks and social markets and is involved in various social projects in the region.