'Supply was sufficient to meet demand with ease'

Local potato offerings dominated the market. Meanwhile, availability expanded a little. Regarding the Musica, Gala and Inovator varieties, the range again expanded in Frankfurt. According to BLE, the supply was sufficient to meet demand with ease.

Overall, demand was slow and marketing did not show any major highlights. This was reflected accordingly in the prices, which mostly remained constant. In Frankfurt, there was a slight increase in prices due to the purchase prices. In Berlin, a very wide price range was established for the last remaining Italian products: some traders ended their sales and wanted to force clearings with the help of strong discounts. 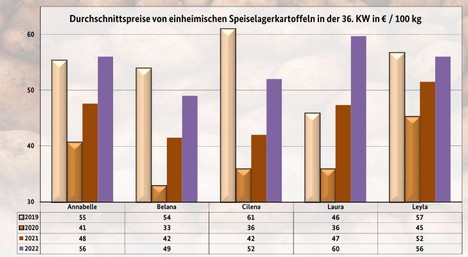 Better harvesting conditions in Rhineland-Palatinate
The precipitation in the second half of the week 36 improved harvest conditions, in some cases significantly, according to the Chamber of Agriculture. Supply and demand nevertheless remain modest so far; the market is very balanced overall. Prices remain at the level of the previous week and the week before. Stocks are filled earlier than usual, so even in regions with better yields, the pressure on the market remains low. Sorting remains high, large caliber goods are extremely scarce.

Schleswig-Holstein: main harvest underway
Recent rains are facilitating harvesting operations. Supply has increased further. Nevertheless, sales through farm stores and weekly markets remain the main outlet. Yields are mostly at a medium level. However, there is increased grading, according to the Chamber of Agriculture. Cooler temperatures are making storage easier. Parties hope to achieve storage premiums later in the season. Nationwide, there are many reports of wireworm infestations, green potatoes and grub damage. This has also resulted in higher cut-offs. In this state, prices were able to hold their ground.

Hesse: Revitalizing demand impulses still lacking
On the Hessian potato market, the stable price development compared to the previous week continues. Impulses from the demand side are lacking so far. With the cooler temperatures, however, increasing buying interest is expected. In the meantime, price-conscious consumers are mainly buying food in small containers, with sales promotions. Despite regional rainfall, clearing remains difficult or is delayed. Yields and quality have suffered significantly.