"After a bumpy start, the pumpkin market seems to be picking up a bit"

The first half of the season for the domestic organic pumpkin campaign has been particularly sluggish this year. "The quality of the marketable produce has generally been satisfactory, yet the quantity is still lacking. Furthermore, we have had tremendous viral problems, particularly in the important organic growing region of Lower Franconia, largely due to the heat. This has led in part to the fact that we had to write off certain plants completely, although certain virus-infected pumpkins are still suitable for consumption," says Georg Thalhammer, specialized organic pumpkin trader based in Steinfeld.

"This disease problem has hit the Hokkaido particularly hard," Thalhammer continues. In the southwest German growing regions around Heilbronn and Ulm, however, the current pumpkin crop looks better, according to Thalhammer.

The first organic Hokkaido pumpkins of this season could already be harvested at the end of July. However, according to Thalhammer, the heat has had a serious impact on the marketing of organic pumpkins. "Marketing has unfortunately been very slow in the first phase of the season. After this bumpy start, the market seems to be picking up somewhat at the moment, which is reflected in increased promotions in the trade, among other things. Meanwhile, it's also supposed to get considerably cooler in the coming week, which usually also has a positive effect on sales of autumn vegetables." 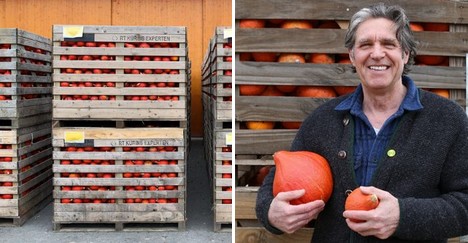 In addition to the commercially available Hokkaido pumpkin, which is becoming increasingly popular in Germany, the first batches of organic domestically cultivated butternuts are currently also being harvested. "Thanks to a new project within retail, we will bring around 500-600 tons to market by Christmas. For us, this is the first large order in the butternut sector and a clear sign that this pumpkin variety is gaining importance in this country," Thalhammer further explains.

Lower yields, pleasing prices
From a longer-term perspective, the organic pioneer is quite confident about the future of the organic pumpkin market. "Due to the Ukraine crisis, most growers 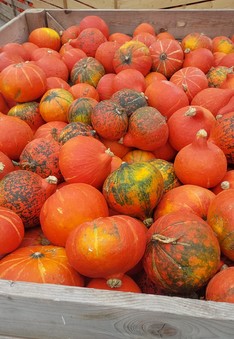 have been somewhat reluctant to sow this year, which is why the total organic acreage has remained about the same. Due to the heat, the total yield of organic pumpkins in our catchment area this year is likely to be about 20-30 percent lower than last year. But that doesn't mean we're necessarily in for a bad pumpkin year. On the contrary; so far we have been able to achieve good, stable prices for our produce, which our growers also need to be able to operate economically in view of the cost increases."

On the sales side, he said, Bioland goods are still far ahead in the organic pumpkin sector. Thalhammer: "Many retail chains nowadays want these goods, and certainly regional goods. The latter is of course particularly disadvantageous for us, as it is now becoming increasingly difficult for us to market our goods in northern Germany. Moreover, due to the turn toward warmer microclimates, more and more northern German growers, such as those outside Hamburg or in Schleswig-Holstein, are turning to organic pumpkin cultivation."

Growing interest in organic garlic
In addition to pumpkin marketing, Thalhammer has been devoting himself to new mainstays, such as organic garlic, for several years. What began two years ago with a modest cultivation area of some 5 hectares has now grown to a total capacity of around 25 hectares in Bavaria. "We start marketing the fresh, green garlic in mid-June, mainly using the larger tubers. The smaller ones are then dried. By commissioning a modern Controlled Atmosphere warehouse, we can offer our fresh garlic considerably longer. For the dried product, we are aiming for year-round availability in the future."