Minions co-branded banana to be released in Hema

Dole and Minions to explore the Chinese market together into
Dole has entered into an official partnership with Universal’s Minions series film. To celebrate this cooperation Dole and Minions officially held an IP licensing cooperation ceremony on September 3 in Shanghai. Kevin Xu, Vice President and General Manager of NBCUniversal Brand Development Business Greater China, Runner Yang, Vice President and General Manager of Dole China, and many famous domestic media and partners were present to witness this important and wonderful moment. 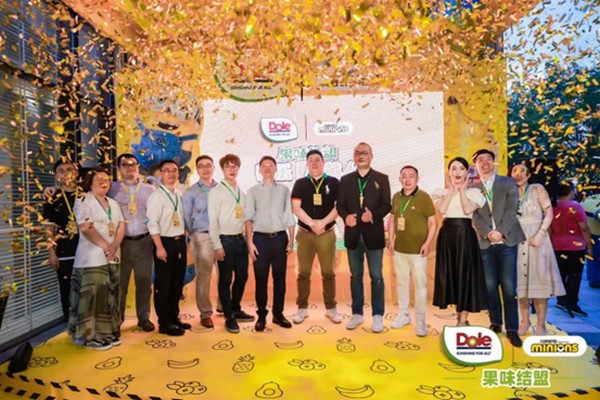 Before the ceremony started, a group of dancers dressed in "Minions" costumes presented an opening show, which opened the surprise prelude to the ceremony. The ceremony officially began, "Minions" with its favorite banana airborne ceremony stage scene. Under the joint witness of the leaders of both sides of Dole, Universal and "Minions", Dole officially became the official authorized cooperative brand of Minions, which is also the first cooperation between Minions and banana brand in China.

At the ceremony, Dole released the first Dole X Minions co-branded product in China, and also the first Minions IP banana product in China - Dole Little Prince banana. This product will be exclusively premiered in Dole's important strategic partner, Hema. Chen Yanghui, the head of fruit category marketing of Hema, took the stage as a special guest to complete the release of this product together with Dole, and the playful and cute "Mr. Hema" also came to the scene with a Dole Little Prince banana in his hand.

Hema is a new retail platform, part of the Alibaba Group. The company aims to create a community-based one-stop new retail experience center for consumers, using technology and the human touch to bring people a "fresh life". Both the brand concept and user groups are compatible with Dole, and the long-term friendly cooperation has brought many fresh fruits and vegetables to consumers. This release of Dole Minions co-branded the Little Prince banana is an exclusive national first surprise product, the exquisite banana has a small and cute smile curve, is the earliest growing banana of the same plant and has the longest accumulated nutrition time.

The new IP products released at the same time include Dole banana family members such as Dole Sweetio Banana. In addition to the banana series, Dole will also launch more fresh fruit and vegetable products full of sunshine and joy this year. The cute Minions packaging with nutritious and delicious Dole fruits and vegetables, invite consumers to look forward to the surprise. 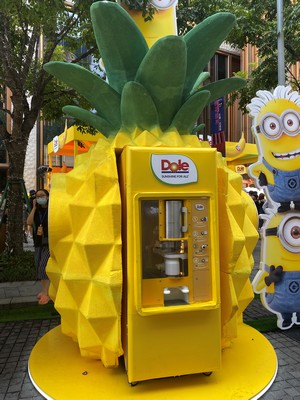 Banana Day, the annual banana festival for Minions, has started. Universal, together with BFC Bund Fengjing Bazaar, held the first Minions Banana Day Bazaar in China, from August 27 to September 4. The bazaar invited Minions IP license brands, and Dole, as the official fruit and vegetable partner of Minions in China. Oversized Dole bananas and pineapples came to the Banana Day Bazaar, attracting many passing visitors to stop by, and the long queue in front of the Dole flash store became one of the most iconic spots of the bazaar. 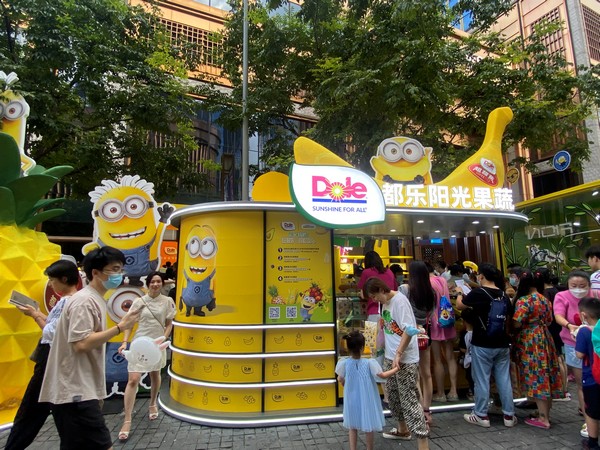 Dole
Since it was founded in 1851, DOLE has become one of the world's best-known multinational groups that produce and market high-quality fresh fruits and vegetables. In June 2020, Dole and Shanghai Disney Resort jointly announced a strategic alliance, and Dole became the official fruit partner of Shanghai Disney Resort.

Dole's mission is to provide high quality products that have a positive impact on people and the planet. And right now, challenges such as climate change, food scarcity, and food safety are still in urgent need of solutions. Based on such a background and as a socially responsible company, Dole launched the "Dole Promise" in June 2020, which includes six positive and interrelated commitments to create shared value for our employees, customers, shareholders and the planet. The Dole Promise contains the following six elements.