A leading Australian strawberry producer says while the whole industry needs to support export growth, it is not necessary for every grower to supply overseas markets in order to get better pricing and create extra sales opportunities.

Jamie Michael is a Director at Ti Produce Marketing Pty Ltd, based in Western Australia, which grows and services wholesale strawberries for the domestic market and exports through Asia, the Middle East, and New Zealand. He says while Australia has a good reputation in the international market, so do a lot of other countries, adding that it would be a bad idea if everyone chose to export because it would create competition amongst themselves when there's enough competition internationally as it is.

"Exporting perishables is both risky and expensive, so why would we bother?" he said. "It is the same reason why we don't sell all of our fruit to the closest place to where we produce - if we spread the country's total production over the largest population base, everyone gets the best return. The industry just needs everyone to support export development and support every opportunity to remove fruit from the domestic market and ensure that the need to serve the broader population base is being met by someone the entire industry will benefit from exports. This is due to the reduced supply nationally and stronger farmgate pricing. We shouldn't just supply export when there's an oversupply and prices are cheap, then stop when it gets better. Export markets are no different from markets in Australia - consistency is key. Having a methodical and committed approach ensures that sales are there when we need them. Dumping fruit into export markets actually causes more damage than what we gain from it." 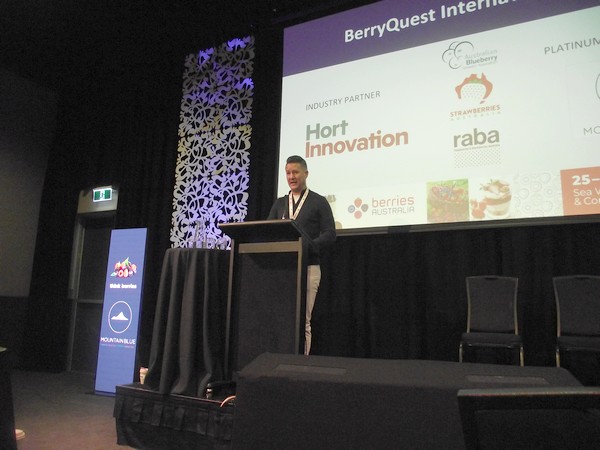 Mr. Michael explained that unless you have a unique and exclusive product and full control over where and how it can be sold, it will behave like any free market, following the rules of supply and demand. He did warn that export pricing may not always match domestic pricing because, in Australia, there are barriers for importers such as quarantine and logistics, meaning it is too high a price for other countries to export their fruit into the country. Overseas, there is the potential for competition from cheaper fruit.

"This means that most export markets will typically pay the same price as the domestic market for like-for-like, freely available products," he said. "If an Australian product returns a higher price overseas than it does here, then an exporter will take a product from here and send it overseas. Less fruit supply here and more fruit supply overseas means that the price here increases and decreases there until we hit equilibrium - the net return from export ends up being fairly equal to net return domestically. It's hard to achieve export prices significantly higher than domestic prices for a long period. This means that having a strong export sector is often overlooked because they are not often obvious or apparent. The benefits are definitely there because if we consider at the peak of the season what would happen if we added the export volumes back into the domestic market, we can then reflect on the export advantages."

Ti Produce started in 2003, sourcing products from local growers in WA and exporting them overseas, not just strawberries but melons and mangoes into the United Arab Emirates, stonefruit into Hong Kong and China, as well as Pink Lady apples into the United Kingdom. Mr. Michael says, soon after, factors around supply, a strengthening domestic market, and international competition led them to pull out of apples and stonefruit to specialize in strawberries.

"We thought that that was where the growth opportunity was in terms of building a more consistent export market for strawberries," Mr. Michael said. "We were geographically and logistically well placed, and our peak season coincided with a gap in the market between the United States and New Zealand seasons, and it was really underserviced from Australia. However, exports were risky, freight was expensive, and collecting money from overseas was quite difficult. Quite often, growers really only turned to export when there was a glut in the market, but because the (export) markets were not being serviced consistently with the right quantity, the importers were quite predatory when dealing with our product. So, claims were high, and prices were low, and we weren't maximizing our potential."

The company says a key part of its strategy was building reputation and market share in its existing markets, especially as the Middle East was opening up and Thailand had signed a Free Trade Agreement. Mr. Michael says after increasing in-market promotional activities, the industry was rewarded with more trust and began to receive more regular import programs. Fifteen years ago, Ti Produce started its own strawberry production to underpin its supply base and give the ability to commit to markets overseas, so it has its own fruit and consolidates fruit from other growers. It also acts as a service and treatment provider to other exporters to strengthen supply chains.

But he admits that the past few years have been particularly challenging for all export programs due to the COVID-19 pandemic, where the lack of flights and up to five times the cost of shipping have also led to a lack of consumer confidence. This has limited the opportunities but maintains that exports are still a valuable part of the industry moving forward and need to be maintained and strengthened.

"We are currently paying the highest airfreight prices in 25 years," Mr. Michael said. "So, we have up to six times the increase in freight costs compared to the pre-COVID period. This, coupled with our record high farmgate prices, will most likely see the lowest export tonnage since we started. The challenges are laid out for us, but despite this, customer interest overseas is still really strong and understand the rising cost that growers are facing, and they are factoring in the higher prices into their programs and testing out higher retail price points to see how they can make things work and keep sales going. The export will be tough for the next few years, but as long as the industry continues to focus on producing the right product, pushes forward in opening new markets, and continues supporting our old ones, the export will be an important relief valve in years to come."