Spectre was developed in response to industry demand to address the impacts caused by a lack of early and reliable size sampling data. The app was launched in New Zealand in 2020, has been in market in the United States since April 2021 and is now available in Australia. To date, more than 27 million pieces of fruit have been detected and sized by Spectre.

Hectre’s Head of Sales Kevin Park and Account Manager Danny Herbert represented Hectre at the APAL event, where attendees got to see Spectre up close for the first time.

“It was a great opportunity for industry to see exactly what Spectre can do. There’s nothing like seeing Spectre in action to truly appreciate its capabilities. We really enjoyed meeting everyone and the interaction with the group was fantastic,” Kevin said.

Spectre’s smart technology means a simple photo of the top layer of a bin of apples, taken from a standard tablet, is all that is needed to generate a highly accurate size distribution graph, all within seconds.

With an average of 125 apples per bin detected and sized in seconds, results can be used in the orchard or in the packhouse to make informed decisions around picking, packing, sales and distribution.

In the orchard, Spectre can be used to ensure pickers are picking to the brief and to give the packhouse a heads up as to what is coming in off the orchard. For packhouses, Spectre significantly improves storage decisions, reduces costly packline stoppages and enables sales teams to sell with confidence, knowing they’ll be able to fill orders.

“The reception we received at the orchard tour was extremely positive and really encouraging. Especially the “Beat Spectre for beersies” competition we ran, where we asked attendees to do what Spectre does and ‘guestimate’ the size distribution of a bin of apples,” Danny said.

“There were some crazy guesses in there, some better than others. It was a lot of fun!” 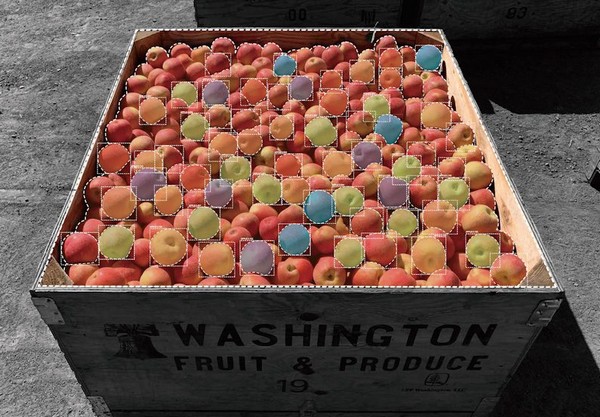 Inside the tech: Using computer-vision technology, Spectre begins detecting apples in the bin and delivers sizing results within seconds.

Last month, Hectre was named a winner in the global AgTech Breakthrough Awards for the second year running. Its fruit app provides both orchard management software plus mobile fruit sizing.