Renzo Panzacchi, president of the Consortium of Chestnut Growers of the Bolognese Apennines in Italy

A good chestnut harvest is expected in Emilia Romagna

"The situation is improving, and the hopes are for a good chestnut harvest from early October," said Renzo Panzacchi, president of the Italian consortium Consorzio Castanicoltori dell'Appennino Bolognese. "Until early August, the size of the chestnuts was small, due to the drought, and there was much concern. Later, the August rains in the Apennines reversed the situation." 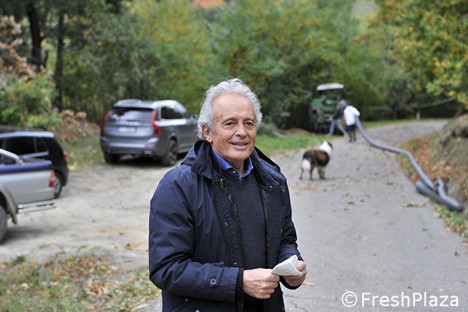 Renzo Panzacchi in an archive photo

Another positive aspect lies in the number of chestnut hedgehogs on the branches, which, unlike other years, is significantly higher. "The insects were affected by the drought, they hit less and the hedgehogs benefited. In addition, some claim that last January, but also February, was warmer than normal and the insects had resumed their biological cycle; the return of cold spring weather knocked down their numbers. I'm not an entomologist, so I can't confirm this factor, but we certainly had fewer pest problems this year."

As for the market, there are three major channels: wholesale, large-scale retail, and, finally, country festivals. The latter are an important source of income for producers, as higher prices can be achieved. In 2019, for example, it had even reached 8-9 €/kg, due to the shortage of production. Covid canceled these events and hopefully this year there should be a recovery in this channel as well.

"We expect to start harvesting in early October. If it continues to rain from time to time, we may see a further increase in gauges, which will all benefit the quality," concluded Panzacchi.