As Argentina’s citrus export season is busy winding down their main lemon exports to Europe increased by 26.88% to an accumulated 245 683 tons while a swing in exports can be seen with 24.77% less to the US and an increase of 16% sent to Russia and 17.4% less to other markets. Exports of other citrus have seen big decreases, except for oranges that has seen an overall small increase of 1.56% driven largely by exports to neighbouring Latin American countries. 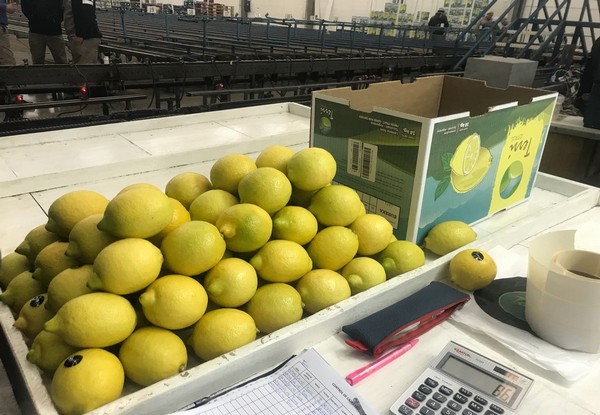 The information is based on the latest statistics up to week 33 of the Citrus Growers Association of the Argentine Northwest (Acnoa), based in Tucuman. After positive export flows during the months of May and June, July -3.41% and especially August -54.82% up to date had bigger decreases in volumes compared to the same months last year.

In a previous statement Jose Carbonell, director of Federcitrus said the increased price of shipping negatively affects all export activities. “We currently can't export anything to China because these shipments require cold storage, which increases costs and reduces our competitiveness." 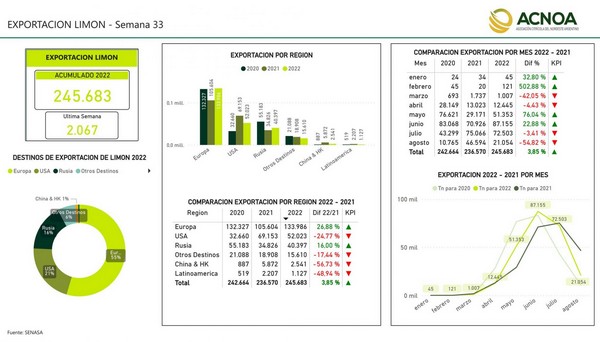 Lemons
Comparing the current 2022 lemon export to last season (2021), only Europe 26.88% and Russia 16% saw increased volumes. The other major markets for Argentina’s lemons namely the US -24.77% and other destinations -17.44% saw declines. Smaller markets had big declines albeit from lower bases with China and Hong Kong -56.7% and Latin America -48.94% lower.

Oranges
Comparing the current 2022 season to last year’s 2021 season, despite the slight 1.56% increase overall that was largely due to exports to neighbouring Latin American countries at 37.66%, exports to Europe was down by -12%, Russia -33.21%, other destinations -34.37% with nothing exported to China and Hong Kong.

Pomelo
The small volume of pomelo sent from Argentina is down by -10.93% with nearly nothing sent to any other markets with almost all exports going to neighbouring countries.