After two years of pandemic, the potato trade company Weuthen invited the sector to the Weuthen KartoffelTag again this year in the old way, and numerous exhibitors and interested parties from the German and international potato sector gathered at the event location in Schwalmtal-Waldniel. Visitors were informed about the latest techniques and varieties and the necessary Dutch traders and suppliers were also present. 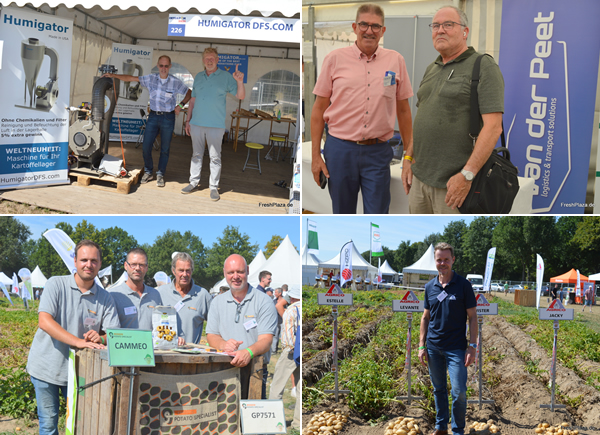 Click here for the photo report of our German FreshPlaza colleagues.

As always, Ferdi Buffen let his light shine with a market assessment of the new European potato crop:

"The potato industry has been in crisis mode for 4 years now. Normal does not seem to exist anymore. The still existing Corona pandemic has faded into the background and since February 24, the Ukraine conflict has been dominating events, causing the commodity, energy, agricultural and thus also the potato markets to ride a roller coaster.

Although the agricultural sector has invested a lot in infrastructure, state-of-the-art technology and irrigation capacity in recent years, we end up depending on the weather. 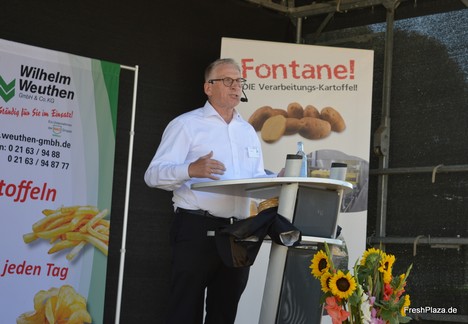 On June 9 -almost 3 months ago- the Maurer Parat early potato day took place in the Palatinate region in very growing weather and full warehouses with potatoes of the harvest 2021. At that time, there was great concern about overproduction. Today, we are once again in crisis mode in northwestern Europe due to persistent drought and now are facing major challenges.

The year 2022 will go down in the history books alongside the well-known drought years of 1976, 2003 and 2018. And after the floods of the previous year, the agricultural sector in particular is feeling what climate change means with the current situation.

But in addition to the great uncertainty surrounding the availability of potato raw material, concerns about the availability of energy, transport capacity, fertilizer, personnel and purchasing power for our products are driving the industry. European agricultural policy contributes to this uncertainty and often makes us doubt the common sense of some politicians. The importance of a secure energy and fertilizer supply, and above all the supply of food, should have penetrated to the last offices of the incompetent decision-makers in Brussels. Farmers are rightly going to the barricades at the moment.

With all these factors of uncertainty, it is important to act wisely and prudently and, above all, to allow all parties in the value chain to benefit. We as partners of agriculture and our customers can only overcome these challenges together!

It is hard to believe, but even this week, several thousand tons of potatoes harvest 2021- in good quality - are still being processed.
Contrary to expectations from the fall of 2021, the potato area for 2022 was expanded by about 2% in the important growing areas. It is also important to consider that there have been notable shifts within the segments. Due to attractive conditions, significantly more French fry varieties were grown in D, F, B and the NL instead of table, seed and especially starch varieties.

Shipment of early table potatoes in Germany was initially sluggish. Imports from Israel, Egypt and southern Europe were preferred to German products, despite all the food retailers' vows of loyalty to regional production. All regions were then able to supply themselves by the beginning of July, so that market access for supra-regional shipments, especially from the Palatinate, was difficult.

This led to early varieties being taken from the field and stored for quality reasons. We were able to place a few dual-use varieties in processing. The Palatinate has lost 35% sales in the last 5 years. We need to take countermeasures here. We will try to do this with very attractive industrial contracts for July 2023. From mid-September, we will back this up with concrete contract offers.

Producer prices for table early potatoes have been at a high level and adequate in recent months. Other early areas were able to quickly supply their own markets. In addition to the regional packing market, the Rhineland also supplied the agreed programs in Benelux in recent weeks. Yield and revenue of the early varieties has been adequate so far. With the yields currently expected and the demand situation, growers can market continuously and calmly with the follow-up varieties.

That the processing industry would not start contract calls until the second half of July had been communicated for a very long time. The further almost two-week delay in offtake and early vegetation caused resentment, especially among pre-sprout growers. Although this is partly compensated by high prices in the daily price share. Nevertheless, it is important to think about this contract design. We can assure farmers that pre-sprouting is interesting, especially for 2023, and will be rewarded accordingly.

Only since the second week of August have shipments of early varieties been in full swing. The proven varieties Premiere and Amora are fully harvested. The variety Francis has also already been marketed and is showing good results in the field and in production.

Yields and qualities were good because the potatoes had already raised their yield potential before the drought. The variety Zorba produces normal yields on almost all sites and is one of the winners of the year on irrigated sites. Sinora confirms its robustness, but will also only produce below-average yields on non-irrigated sites.

In recent years, seed potato trading companies have developed low-input and also hardy drought-resistant varieties. Some varieties are like weeds, but with periods of 8 to 10 weeks without rain, even these varieties cannot produce reasonable yields.

This is equally true for French fries, table, and chip varieties. Foil potatoes have been marketed on schedule in recent weeks. Lady Rosetta is the earliest and safest chip variety. Austin also proves its worth and also scores well in chips and wedges production.

- Loadings of the early processing and dual-use varieties will continue through mid-September. We will try to take advantage of any growth potential.
- High raw material prices, lack of availability, high energy prices or availability of gas are also a major concern for factories. Europe wants and needs to remain competitive in the global market. Whether all factories will be able to operate at full speed with the upgraded production facilities remains to be seen."

Click here for the photo report of our German FreshPlaza colleagues.