Iraq is Turkey's second largest client of Turkish fruit and vegetables. In the first six months of this year, the Turkish Central Bureau of Statistics, Turkstat, reports that the country exported far more of those products to Iraq than over the same time in 2021.

At 500,000 tons, Turkish fruit and vegetable exports to the EU27 countries, as a whole, remained exactly the same in this year's first half as the previous year. However, the dollar value of these products lagged.

However, the dollar value of all exported goods was higher in 2022's first six months than in the same time in 2021. Germany, the United States, and the United Kingdom are the three main buyers of Turkish goods. China and Russia are the leading suppliers of all goods to Turkey. Imports from Russia, in particular, sky-rocketed to $28 billion. That is just about equal to the whole of 2021.

Especially citrus exported
When it comes to Turkish fresh fruit and vegetable exports, mandarins are the most important product. In the first half of this year, exports of these grew substantially. That also applies to the second product, lemons. However, that was offset by the decreased exports of tomatoes. Apple and onion increased again.

But in 2022's first half, Turkey managed to export plenty of its oranges, especially to Iraq. That partly explains the voluminous export to that country. Turkey exported other products, like lemons, mandarins, onions, pomegranates, and apples, to Iraq too. 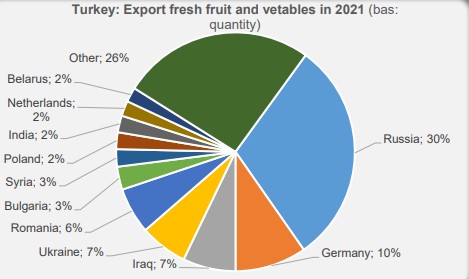 10% less to Russia, but vast difference per product
Turkey's decreased export to Russia was not due to the two top products, mandarins and lemons. Russia took far more of those in the first half of this year than in the first half of 2021. However, far fewer peaches, oranges, and tomatoes were exported to Russia. Turkish apple exports to Russia, on the other hand, did well again.