'Domestic and Dutch cucumbers at quite high price levels'

Domestic and Dutch cucumbers apparently dominated the market at quite high price levels. According to the BLE, the background to the current high prices is not only difficult production conditions due to the extreme weather but also increased costs along the entire value chain to the end customer. Belgian offers appeared in large quantities only in Frankfurt and in small quantities only in Munich. Although availability was limited, it was sufficient to meet the constant demand. In some cases, demand was limited due to the holiday season. 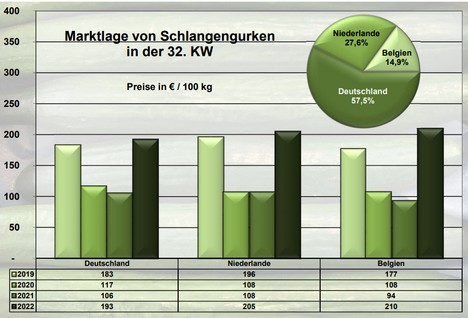 However, since supply and demand were sufficiently balanced, prices also remained consistently high overall. With improved sales possibilities towards the weekend, traders also had the opportunity to implement further slight price increases. Mini cucumbers came from domestic growers, the Netherlands, and Türkiye. Sales were unexciting. In terms of prices, not much happened: slightly decreasing prices were noted, as well as minimally increased demands.

Table grapes
Italy dominated the scene: Many varieties were available, so a wide price range could be found. Fruit that was in poor condition further reinforced this trend, and locally some products had to be sold as quickly as possible. In general, however, demand was not very strong.

Strawberries
Local products clearly dominated the market. They were accompanied by inflows from the Netherlands, Belgium, and Poland. The season was slowly entering the home stretch: Despite the high temperatures, a certain customer saturation could not be denied. Availability grew and, in some places, outstripped demand.

Apricots
Availability narrowed. French imports dominated, ahead of Türkish and Italian imports. Deliveries from Eastern Europe supplemented the markets. In Frankfurt, domestic offers cost up to a hefty €5 per kg, but this hardly hampered sales.

Cherries
Availability was obviously limited. German and Polish fruit-dominated events, with the latter appearing particularly in Berlin and completely absent in Cologne and Munich. Shipments from the Netherlands, Türkiye,  and Greece played only a minor role. The season was nearing its conclusion.

Peaches and nectarines
Spanish and Italian supplies apparently formed the basis of the offer. Lots from France, Türkiye,  and Greece played only a small role. The advanced campaign was noticeable, as the quality of one or the other batch had to be criticized. In addition, both the supply situation and the demand had decreased.

Plums
Local offerings dominated. In addition to Cacak's Schöne and Top, Auerbacher and Hanita were the most popular. The assortment changed continuously. For example, Cacaks Fruchtbare from the domestic market also arrived. Prices tended to go up rather than down.

Lemons
South African imports outweighed Argentine ones. Spanish lots had an overall complementary character and actually played a major role only in Munich. Overseas imports were discounted in Frankfurt and only Argentine items in Cologne.

Bananas
The holidays and high temperatures were the main reasons for a rather weak demand, which was met without difficulty. In some places, traders tried to raise their prices slightly, but this rarely led to much success.

Cauliflower
Domestic offers predominated. Only supplementary quantities came from the Netherlands and Belgium, but overall they gained relevance. Sales were rather limited: The summer weather, as well as the holidays, nevertheless limited demand noticeably.

Lettuce
In the case of iceberg lettuce, domestic and Dutch products shared the business between them. Only in Hamburg were there very few additional Spanish items. Sales were slow. Lettuce came from the domestic market and Belgium. In this sector, too, demand was satisfied without effort.

Tomatoes
As usual, at this time of the season, Dutch and Belgian deliveries dominated the scene. Shipments from Germany, Poland, and Italy were at most of a supplementary nature. Overall availability increased and was sufficient to meet the steady demand. Nevertheless, overall prices remained at the level of the previous week.

Sweet peppers
Dutch shipments prevailed, and Belgian ones supplemented the range. Only limited quantities came out of Türkiye. Polish goods rounded out the product range, but just in very small quantities; domestic lots cost up to €4.30 per kg in Frankfurt. Marketing proceeded on a relatively quiet track.