Basilio Civello, Fruchthandel Civello, on the start of the Sicilian mango season:

"Not only the heat wave affected mango cultivation, but the spring rains as well"

Exotic fruit cultivation on the Italian island of Sicily has developed rapidly in recent years. It is not just mangos and avocados that grow and thrive in the Sicilian microclimate, but unusual tropical fruits such as lychees and pitahaya as well. But this year's freak weather has now also taken a firm grip on Sicilian fruit growing, says Basilio Civello, owner and managing director of Civello Fruchthandel Ltd and a specialized importer based in Geroldswil (Zurich). 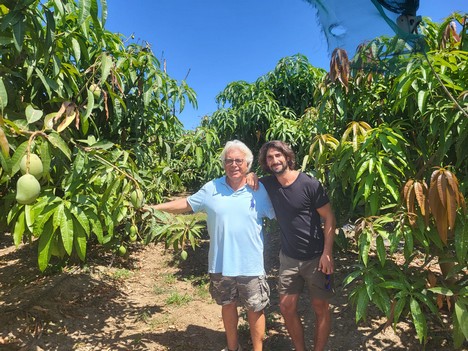 Vincenzo Amata (left, PapaMango) and Basilio Civello. The marketing window for Sicilian mangoes: the fruit can be procured until the beginning of October at the latest, depending on the weather.

The passionate fruit specialist has only been involved in importing Sicilian produce since December last year. "I have good hope that I will crack the 30-ton mark by the end of the year. That's because in the fall and winter, the 'stronger' items like pomegranates and agrumen come into yield, so we'll probably be able to move more volume."

While the first Sicilian limes of the season arrived in Switzerland this week, Civello is already pleased with the first shipment of mangoes, an important item for the Zurich-based company. At the same time, however, weather-related losses and accompanying price increases must be expected, he adds. "Not only the current heat wave is putting a strain on fruit growing, but also the rainfall in the spring."

Nevertheless, one must clearly differentiate the effects: Compared to avocados, mango trees are particularly sensitive and care-intensive, which is why mango production will see the greatest damage. "That is why I think a price increase is inevitable, although it is too early to make precise statements at the moment."

Civello continues that a similar situation is currently being seen with Sicilian staple items such as melons. "It's just a challenge right now to get fruit that meets the quality standards here. With melons, for example, you see Sicilian produce being replaced by produce from central or northern Italy because of quality issues. In contrast to the exotics, other fruit crops, such as stone fruit, have suffered particularly from the current weather, especially the high, persistent humidity."

Avocados on the rise, keen interest in lychees and dragon fruit
The extent to which weather will affect avocado production in Sicily is difficult to predict at the moment, as harvesting of the market Hass variety does not begin until November. From a longer-term perspective, the trend is moving upwards, Civello notes. "The supply, meaning the total export volume, continues to expand year-on-year. Depending on the weather, avocados can be delivered as late as February."

In addition, new, previously unknown fruit exotics are enriching Sicilian fruit production, Civello further describes. "Dragon fruit and lychees are gradually gaining importance, and the interest on the grower side to cultivate these fruits is definitely there. The same goes for ginger, turmeric and saffron." 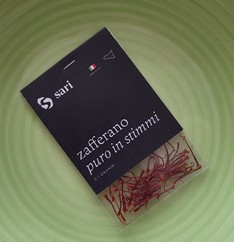 working on building his business and related infrastructure and is looking for opportunities to establish an additional hub in Sicily. He is also working with a Sicilian herb and saffron producer on his own line of spices. "Saffron from Sicily is of high quality and will hopefully find its place as a niche product in the Swiss market via Civello. We also aim to produce Sicilian curries, curry blends made exclusively with Sicilian spices," Civello concludes.