In September, the Sweet Sensation pears for the coming sales season will be harvested. A good time, according to The Greenery Growers, to look ahead and take a tour of the orchard. That is why The Greenery Growers organised two grower meetings on Thursday, August 10.

Because the demand for Sweet Sensation is as high as ever, The Greenery would like to expand the acreage. Interested growers were invited to Alfred van den Bert's farm in Wijk bij Duurstede in the afternoon of 10 August. 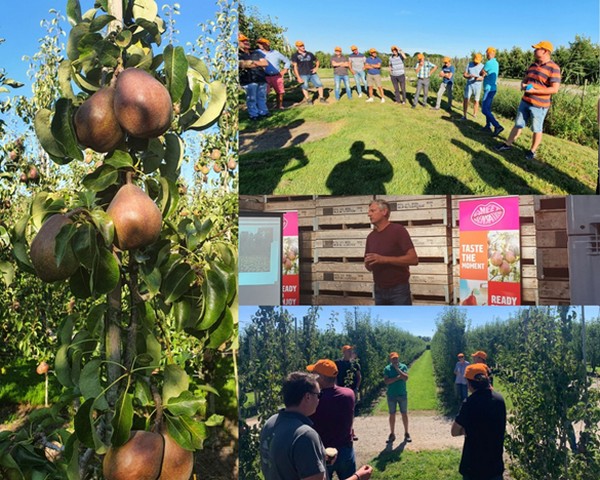 Sweet Sensation and Sweet Dored
Sales manager Ton van Wiggen informed the growers about the concept and the sales strategy. The most important message he had was that between 85 and 90% of the pears can be sold as class I. This is due to the fact that the Sweet Dored brand has been introduced in the market alongside the Sweet Sensation brand. Both brands now have a solid basis in various European countries. "Because the demand for both brands is growing, it is important that acreage is added."

Good returns
Using the results of two different seasons, product manager Rob van der Weele (Fruit Product Manager, The Greenery) demonstrated the returns that growers can achieve with Sweet Sensation. "We can see that yields comparable to or higher than those of a more standard variety can be achieved. This is due to the combination of high and stable pricing for both Sweet Sensation and Sweet Dored, as well as growers who know how to cultivate the variety.

In the orchard, grower Alfred van de Berg and cultivation adviser Dirk van Hees talked about growing Sweet Sensation. Among the trees, it was already clear that the quality of the harvest was going to be extremely good.

Workgroup chairman Lena Zevenbergen: "The growers who attended went home pleasantly surprised and got a good idea of what is possible with Sweet Sensation."

Meeting for current growers
In the second half of the afternoon, the current growers also came to Alfred van den Berg's farm. Ton van Wiggen updated them on the harvest expectations for the coming season. In addition, Ton shared his approach to price setting for the coming season. He also mentioned that it is expected that all customers of the past years will include the pear in their programme again. The reliability in quality and taste plays an important role in this. A number of new customers have also already signed up for next season.

After Ton's story, the growers toured the orchard and received the latest tips for the harvest, with the most important advice being to monitor the sizing of their own plots closely in order to arrive at the retail sizing programme as much as possible. Afterwards, during the barbecue, the mood was good and it turned out that the growers, like The Greenery team, were positively disposed towards the new season.

Ton van Wiggen: "Transparency towards fruit growers is very important to us, which is why we share our expectations of pricing and customer packages in advance of the season. The annual grower survey we conduct among Sweet Sensation growers shows that this transparency is highly appreciated."

For more information:
The Greenery Growers