Blueberries from the most northerly producer in the world

The Mitchell family have farmed at Castleton since 1992, formerly run by Murray Mitchell, it is now operated by his son Ross. The farm, situated in Aberdeenshire on the east coast of Scotland has always grown strawberries, but as the 21st century approached Murray decided to expand the acreage into a commercial scale and the first poly tunnels were erected in 2000.

This extended the season and protected the crop from the worst of the weather, they then progressed into growing raspberries, blackberries, blueberries and cherries. Castleton Farm is the most Northerly blueberry farm in the world.

The strawberry harvest is now in full swing, the first blueberries from the heated tunnels were harvested back in May and a few early cherries are being picked. 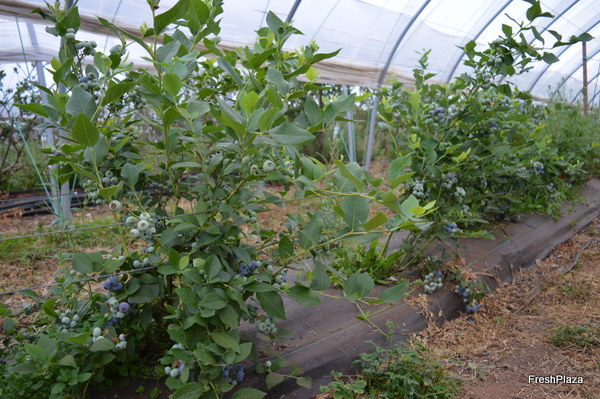 Blueberries are grown over 70 hectares of tunnels, with some heated to get the first early production in May instead of in July/August. There has been huge investment over the years in the blueberry production to have it all undercover and a biomass boiler system has been installed which uses wood chips to produce hot water which is piped into the tunnels. There are many different varieties grown to fully extend the season, from the early Chandler variety to the premium Sekoya range.

“We are just starting the first picking from the unheated tunnels,” said Dane Castle, Growing Manager at Castleton. “Here on the east coast, we have a good climate for growing albeit a shorter growing season. We grow the Sekoya Grande and the Sekoya Crunch, these are high chill varieties suitable for the Northern Hemisphere. They are very high quality and have a longer shelf life. We have started to replace the older varieties with ones which are better and easier to pick and pack.”

Normally 2-3 pickings are done in each tunnel with around 2-3 weeks in between, this of course in weather dependent.

Aberdeenshire has seen temperatures of 31 degrees this week, normally its around 18 degrees at this time the year. This has brought production on faster and low rain fall has caused the reservoir levels to fall. 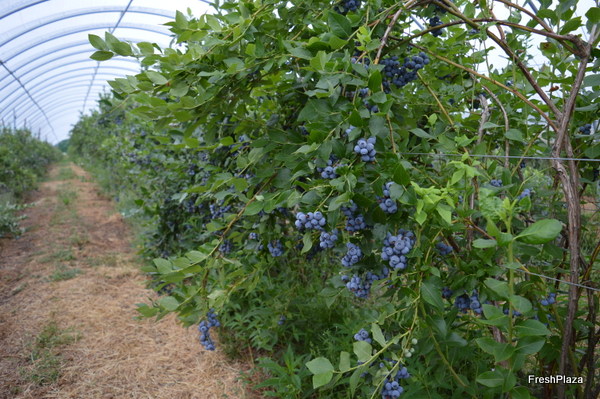 “Everything is line irrigated and it’s all automated, but we will have to be careful and make plans. We normally have a good window between the English peak production seasons, but the warm weather across the UK will change the timings this season, it will possibly mean an early end to the English production which will leave it open to Scottish producers, but we will have to wait and see how it turns out. We expect to harvest 500 tonnes of blueberries this season.”

Most of the fruit grown at Castleton is marketed by Berry Gardens, they also supply independent grocers through Scotland, the remaining fruit is sold at the very popular farm shop. 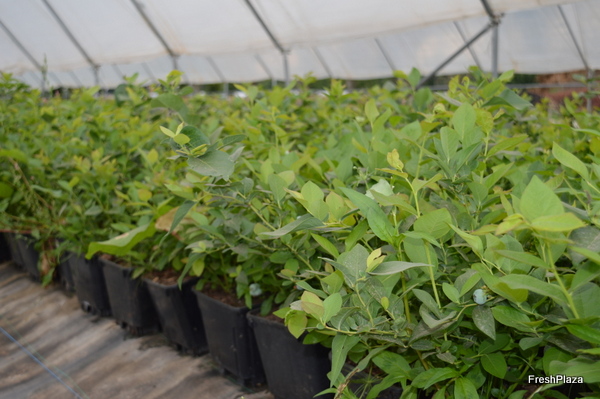 Potted blueberries in the nursery

The blueberries are split between pot and soil, with the first 2-3 years always starting in the pot to build the roots and frame. But some remain in pots as it depends on the soil type, if there is too much clay in the soil then they remain in pots.

At Castleton they try to have a very low carbon footprint, firstly by using the biomass boiler fuelled by wood chips to heat the tunnels. The wood used in this is locally sourced and from their own forest, also any waste wood is used as well. In January Scotland was hit by a massive storm which left thousands of people across the north and northeast without power for days after gale force winds hit the area. 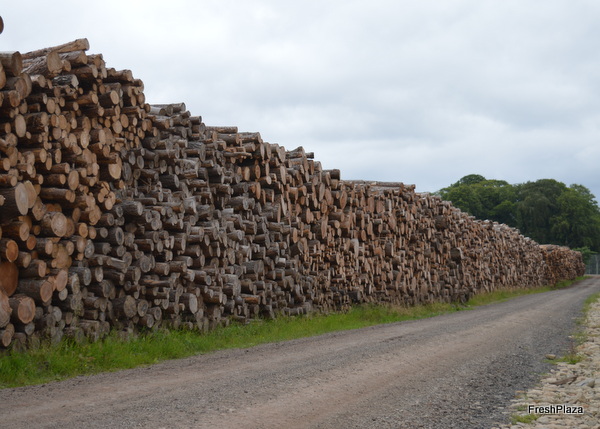 There was extensive damage done to the tunnels on the farm, a lot which is still being repaired now. The storm also took down a lot of the trees on the farm, which are now being used as fuel as the forests are cleared up.

Just some of the damage to the forests from the storm

Getting workers is a challenge for most growers these days and Castleton needs around 600 in peak season to work alongside the 25-30 permanent staff, but according to John Popa, the other Growing Manager, they have managed to get a full crew. “The Ukrainians didn’t come back this year, but we have workers from other Eastern European countries as well from Indonesia. We have very few ‘returners’ which makes it very difficult as new workers need to be trained and takes a while to get up to speed, but that is how it is.” 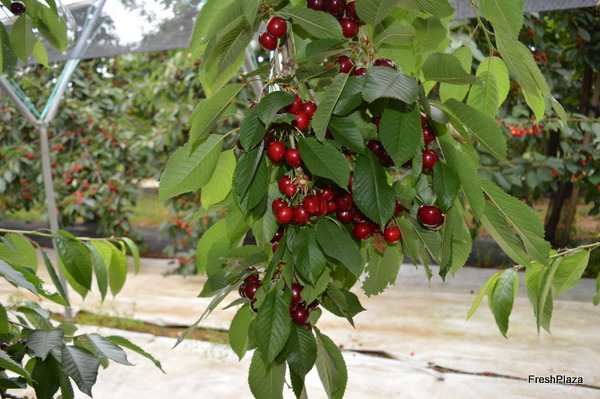 According to John, Castleton Farm is the latest cherry producer in the Northern Hemisphere with 23 hectares of cherry tunnels. “We have started picking the early cherries, these are mainly sold at the farm shop. The main season will begin in two weeks’ time, with us finishing the season in late September with the late variety Stoppel.”

Looking to the future Dane spoke about the progress in machine harvesting, “There is fantastic technology out there and they are improving leaps and bounds every year, but for us at Castleton to harvest for the fresh market we are still a few years away. The machine harvesters shake the berries off the trees which can result in a lot of waste, even if it is it down to 30%, that is still a lot of your crop and when you combine that with investing in a machine the expenses add up. Varieties need to be quite robust to withstand the harvesting process as well as have the correct structure for the machines to work correctly. Machine harvesting will come, it will just take some time and preparation.” 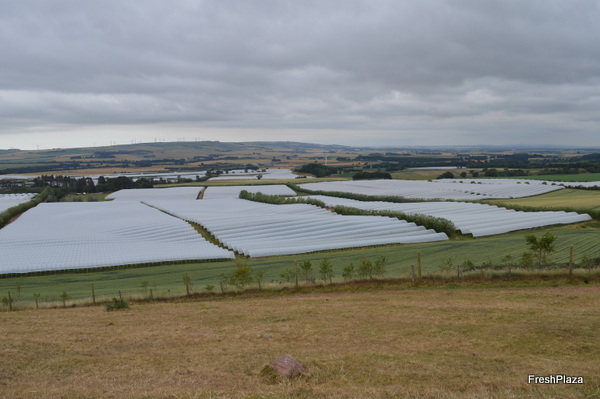 Castleton Farm from the hill