Eliane Steinmeyer and Alexandra Adler on the 60th anniversary of the Hamburg wholesale market:

"What Covid has shown is how important a wholesale market is to urban life and, more importantly, to the security of supply"

For 60 years, Hamburg Wholesale Market in Hammerbrook has been a cornerstone of food supply in the Hamburg area and beyond. As a member of the World Union of Wholesale Markets (WUWM) and as part of the board of GFI Deutsche Frischemärkte, Managing Director Eliane Steinmeyer is very familiar with the situation of wholesale markets. We spoke with her and Marketing Manager Alexandra Adler on site about current challenges and new potentials at the wholesale market. Apart from the anniversary, the wholesale store can also look forward to an extension until 2044 of the location guarantee. 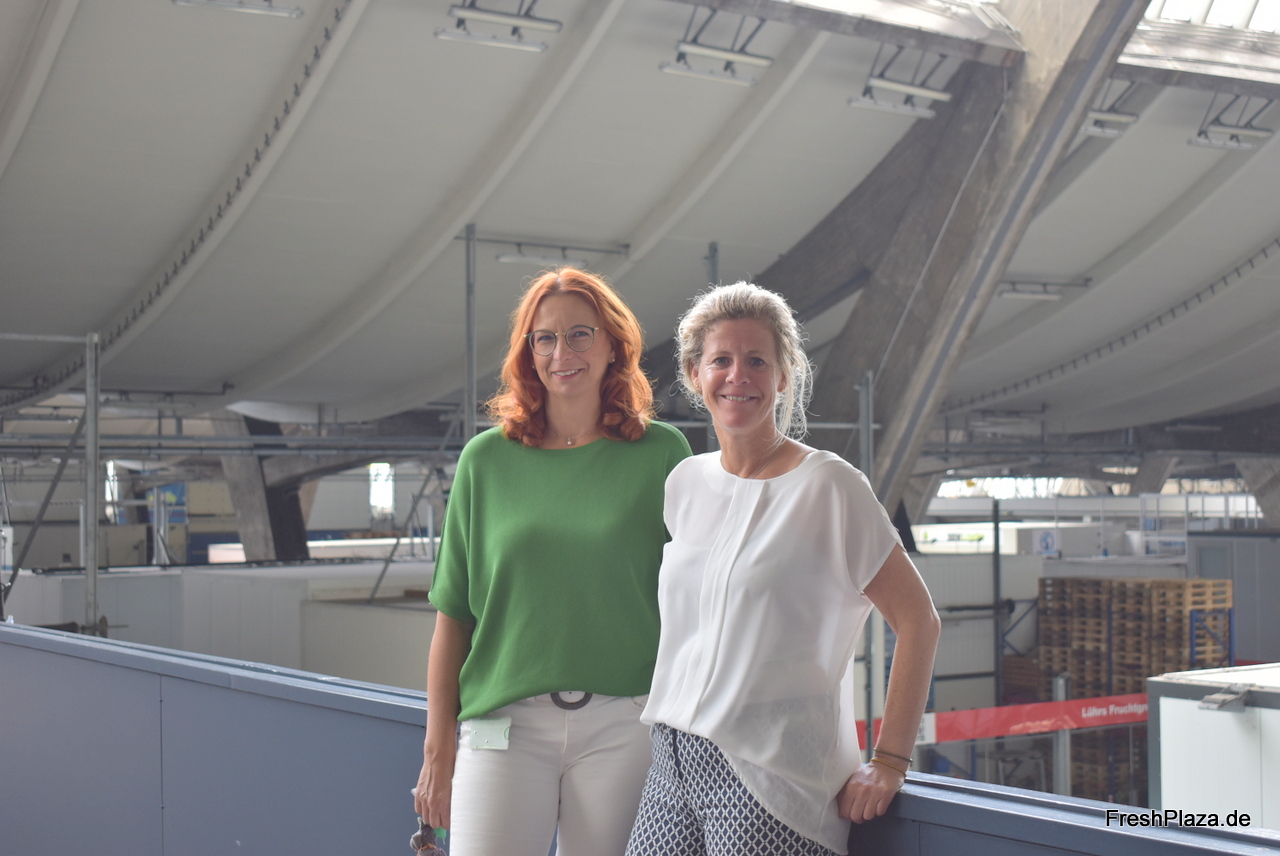 Interest in marketspace remains high
"During the pandemic, the number of bankruptcies did not exceed normal levels. On the contrary, demand for space in our wholesale market remains high. In fact, we have too little space rather than too much. The spaces are also constantly being renovated and upgraded, and refrigerated spaces in particular are virtually being snatched out of our hands. There are even waiting lists at the moment," Steinmeyer notes.

"Existing operations that are doing well, tend to get bigger. If there are closures, it tends to be due to age and a lack of both young talent and personnel. The latter, however, is a problem across the board, regardless of the industry." For example, there is hardly any specialist retailing in the fruit and vegetable sector, and so-called 'corner stores' are almost impossible to find anymore.

Even if there is a recovery in the catering industry, he said, and this is accompanied by high demand, this sector is also suffering from a shortage of workers. "They could definitely do more if they had more staff. That's where a lot of staff has left in the last two years. One of the ways restaurant employees make a living is by tipping, which wasn't included in regard to government aid." Wholesale market traders, who primarily supply the catering industry, had their rent deferred by the management.

Analog market, digital security
E-commerce is not yet an issue at the wholesale market, she said. During the pandemic, however, more merchandise was ordered by mail. Steinmeyer: "Many people order their goods online and have them delivered, but this is not an actual e-commerce process. We want to take a look at the solutions that have been implemented so far. To this end, we are speaking with the Rungis wholesale store in Paris, which offers a kind of Amazon Fresh for wholesalers. We want to check whether this can also be transferred to Germany and Hamburg in particular. Whether the local market is ready for this remains to be seen. In general, Germany is always lagging a bit behind when it comes to e-commerce," says Steinmeyer.

However, she is also certain that the fruit and vegetable trade cannot be completely digitized: "We still need the classic analog market, i.e. stands, pallets and forklifts. Fruit and vegetables cannot be transported via WLAN. Although we are a relatively old market, nevertheless, some things can still be modernized." In addition to refurbishing the premises, this also means replacing the hall doors, which will be connected to an access control system. Market passes that grant access were digitized a few years ago. Furthermore, signal transmitters will be installed at the gates, to reduce the speed of forklifts in the halls in order to prevent accidents. 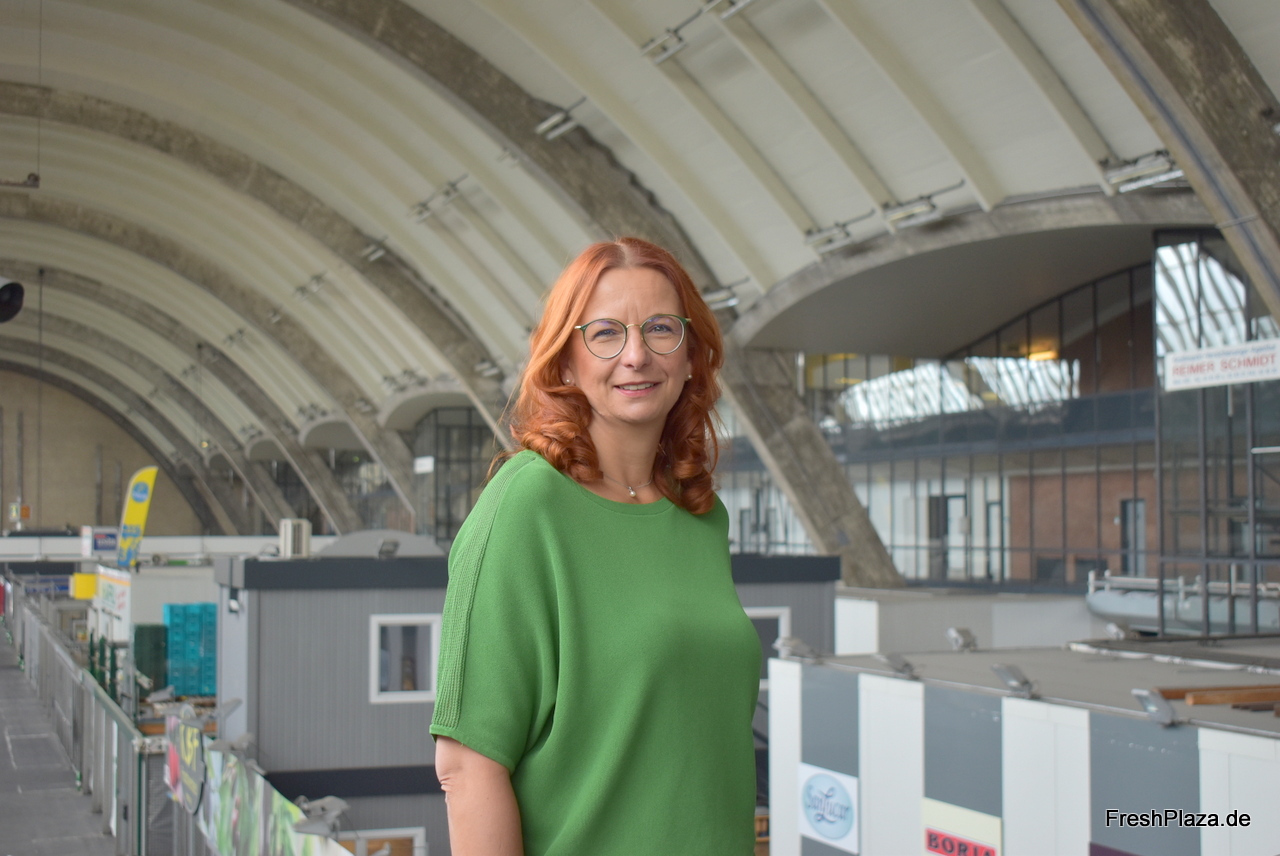 Inflation meets low demand
The inflation that has prevailed for several weeks is particularly noticeable in higher-priced products such as asparagus or airfreighted merchandise. Consumer behavior has also changed, while demand has fallen, she said. "For both strawberries and asparagus, demand was rather restrained, and that was despite prices being quite low here and there."

Low capacity
Added to this was low capacity for airfreight as well as ships. "Prices have risen a lot regarding transportation in general, and there is no end in sight so far," Steinmeyer continues. "Schedules have also been shaken up as a result. While there are still lockdowns in China, there have been strikes in the ports of Ecuador and Hamburg. Combined with the existing crises, of course, it's shaking up the whole sector."

Price more relevant than origin
In the past two years of the pandemic, a strong trend toward regional goods emerged. However, Steinmeyer estimates that due to price increases, a large proportion of consumers will increasingly pay more attention to price and less to origin. "If we assume that energy prices will rise quite a lot in Germany, up to 25 percent of the population could be affected by energy poverty, according to some reports. That means savings will have to be made elsewhere."

Guided tours, cultural events and more
After a two-year hiatus due to the pandemic, guided tours resumed in June, led by a former employee who worked at the wholesale market for more than 40 years. "The tours were regularly fully booked before the pandemic and are currently so again. But our large grounds also host cultural events such as theater performances of 'Harry Potter and the Enchanted Child.' The Harley Days also took place again," adds Adler. But the area is also used for film productions, training of bus drivers, projects of the TU Hamburg, etc. There is even a small museum at the wholesale market, the Zusatzstoffmuseum.

Summer festival and Food Market Hamburg canceled
"We had planned a big summer party around our anniversary. But what we had in mind was not possible under the circumstances. Likewise, we had to cancel Food Market Hamburg in September for the third time in a row, an event that many Hamburgers attend. With catering businesses suffering from massive staff shortages, it wouldn't have made much sense from that perspective either," says Steinmeyer. "In addition, some producers simply haven't weathered the crisis. And with masks and distancing, such an event doesn't make sense. So the uncertainty was just too great overall."

Markets essential for supply security
But such events, in addition to the socio-cultural aspect, also serve in part to finance the wholesale market. "It keeps rents at a stable level. We also organize these events to generate additional revenue and thus keep trade as favorable as possible. In that respect, it's also in the interest of retailers and consumers, because otherwise there would be costs that we would have to pass on to retailers, which in turn would be reflected in consumer prices," says Steinmeyer.

Supraregional supply reach
From Denmark as well as western Poland and Mecklenburg-Western Pomerania and Brandenburg, she says, many traders traveled to the wholesale market to buy goods, sometimes even during the pandemic. "When Covid started, a run on the weekly markets set in. Merchandise that would have otherwise been sold to restaurants, was able to be shifted to the weekly markets. But suddenly we also had a lot of local supermarkets approaching the traders, because there were a lot of complications with deliveries from abroad," Steinmeyer says.

"You can only overcome a situation like that if you are a fixed, large-scale institution. Traders are competitors, but they are also one big family that supports each other. Thanks to the huge hub we have here, we were able to cater to everyone. What's more, none of our businesses went bankrupt during Corona. What Corona has shown is how important a wholesale market is for urban life and, above all, for the security of supply."

Brand awareness wholesale market Hamburg
To mark the anniversary, the management produced a print magazine by showing a cross-section of all the people who have kept the business running for 60 years. It also describes the history and architecture of the wholesale market. The magazine is also available in various bookstores in Hamburg. Furthermore, a special brochure on the value of the wholesale market for the city of Hamburg was distributed to 50,000 households via the Hamburger Abendblatt at the start of the year. 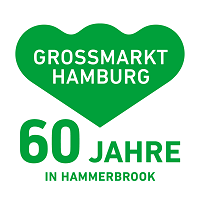