For MY 2021/22, EU orange production is expected at 6.1 million MT, below previous season levels, driven by moderate production declines registered in Spain and Italy, which combined account for nearly 80 percent of the total EU orange output. In Spain, the combination of DANA at the end of August 2021 as well as hailstorms in September and November deteriorated yield expectations. 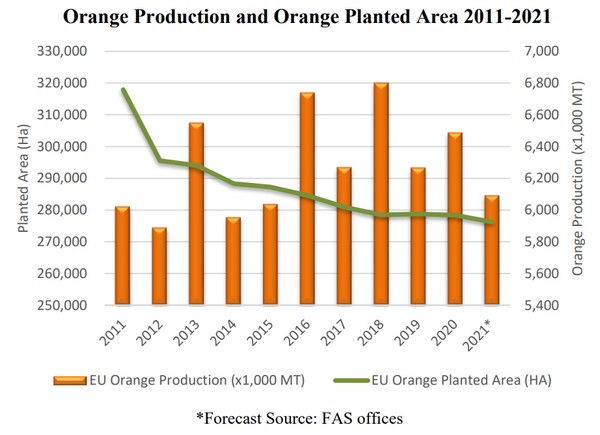 Italy’s orange production was negatively impacted by the floods in Sicily, one of the country’s main producing regions. Additionally, the summer 2021 heatwave and lack of rainfall resulted in a 20 percent production reduction in Greece. Conversely a larger orange crop was recorded in Portugal, driven by the long-term trend of more efficient and irrigated citrus farms entering into production.

According to the EU Citrus Dashboard, during the first half of MY 2021/22, EU average orange prices were higher than the last five-year average. However, since April 2022 average orange prices in the EU have fallen below the five-year average. Latest statistical information indicates that EU orange prices in May 2022 stood at 77 Euros/100 Kg. This rise in prices was mainly fueled by the somewhat lower supply, the steady EU orange demand, and increasing energy prices and inflation rates in the EU. As Spain is the major orange supplier to the EU, the rise in Spanish orange prices also stimulated the overall EU price.