For years, the Alte Land region just outside Hamburg has been known for its tradition of pome fruit growing. Every year, tons of apples - whether club or standard varieties - are produced in the northern German fruit-growing region, after which they reach the consumer either via nearby wholesale markets or food retailers. But that could change significantly in the coming years, as more and more growers are now turning to stone fruits, not just the tried-and-tested sweet cherry, but also apricots, nectarines and the like. We spoke to Christian Bohn, managing director of Gerkens Fruchtgroßhandel, about the results achieved so far in home cultivation and the marketing potential of northern German stone fruits.

In addition to the classic fruit wholesale business at the Hamburg wholesale market, the Gerkens company operates its own fruit farm in the heart of the Alte Land region. On about 30 hectares, mainly apples, various berry fruits and, in recent years, cherries increasingly grow and thrive. Bohn: "We are devoting more and more of our time to growing our own stone fruit, while the cultivation of pome fruit has been reduced in recent years. In addition to our cherries, this year we will also be able to market the first full yield from our apricot trees, which were planted about three years ago. In order to be able to offer German goods earlier, we have already started with South German apricots at the end of June. In addition, we have now been carrying goods from the Bremen area for a few days." 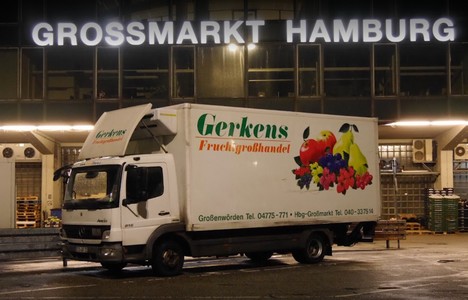 Christian Bohn takes care of the stand sales at the Hamburg wholesale market, while his brother Dirk manages the fruit growing in the Alte Land.

Focus on unusual apple varieties
Although pome fruit cultivation has lost relevance in favor of stone fruits, there will still be apples from the company's own orchard in the coming season, assures Bohn. "We have simply recognized for ourselves that the cultivation as well as the distribution of standard apple varieties on the market tends to become more difficult. Instead of so-called standard varieties, we are now focusing more on the cultivation of selected apple varieties that we can place on the market through fixed programs. One example is the selenium-free variety Selstar, which has recently been cultivated in the Alte Land region. Other special apples are already in the planning stage." 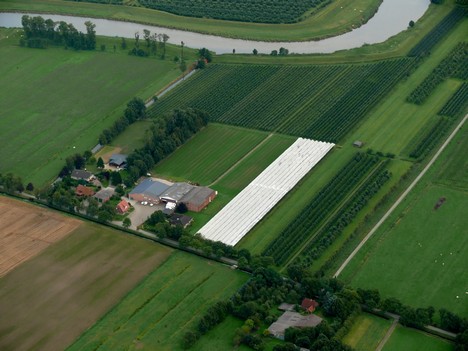 Aerial view of the Bohn fruit farm in the heart of the Alte Land region.

Experimental plant for nectarines
Meanwhile, efforts are underway to expand the local stone fruit crop to include new products. Bohn: "We have built a covered trial facility for nectarines in which about 20 different varieties will initially be tested in detail. Our ambition is to be able to serve the local market with regional, untreated nectarines in a few years. In view of the test phase and the further lead time, we will probably not be able to offer market-relevant quantities until 2030. If everything goes according to plan."