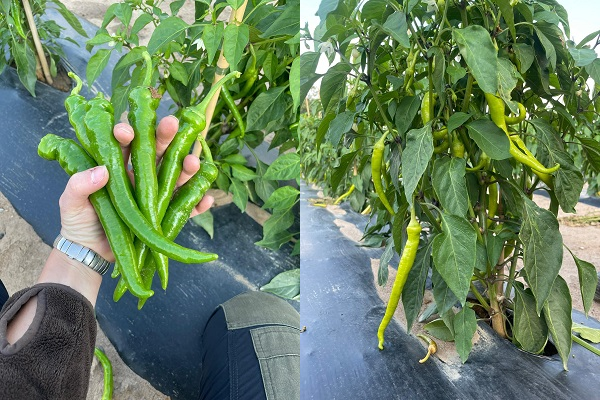 "The bell pepper harvest looked good this year. The season started in early July and will last until about mid-October," Klein says. "Peppers have a relatively long field life. The flavor gets better with time, similar to tomatoes, which also have a long retention time, giving you more leeway."

The peppers are not suitable

for wholesale, Klein said, because they are small and crooked and intended exclusively for direct regional marketing. "We also grow free-range eggplants, but we are facing similar problems with this product, especially since eggplants are also very affected by slug infestations," Klein says.

When it comes to strawberries, on the other hand, of which he is still selling the last lots, he was able to achieve good yields this year. Some of these goods were sold to wholesalers as well. However, he says the average price of €2.00/kg was not necessarily exhilarating.

ercent more costs and around 30 percent fewer sales, this year will also be rather poor overall. That's because either everyone is on vacation or wants to save where they can. And the first thing people save on is regional fruit and vegetables. Vacation is sacred to many," Klein concludes.