In 2021, the total volume of incoming and outgoing cargo shipments to and from Dutch seaports increased by 6.4 percent to 593 million tons. Unloading of goods increased in particular, by 7.5 percent relative to one year previously. The total weight of goods shipped out of the Netherlands amounted to 200 million tons, representing an increase of 4.2 percent. This is evident from new figures released by Statistics Netherlands (CBS).

In 2021, the volume of cargo unloaded at Dutch seaports rose by 7.5 percent to nearly 393 million tons. This is mainly due to the fact that more dry bulk cargo was unloaded such as coal and ores (+20 percent). In 2020, this flow still decreased by the same percentage. With the German steel industry picking up again and due to the high price of gas, inbound coal shipments rose by 40.5 percent to 40 million tons. Transhipments of unloaded ores increased as well, by 25.3 percent to 33 million tons, virtually matching the level of 2019.

Most shipments from Russia
Most of the cargo unloaded at Dutch seaports originates from Russia. This was nearly 19 percent in 2021 and mainly consisted of crude oil and petroleum products. The total flow of goods from Russia grew by 22.3 percent to 74 million tons. The remaining countries in the unloaded cargo top five are (in order of weight): the United Kingdom, the United States, Norway and Brazil. The inbound cargo shipments from all top five countries increased, with the exception of the United Kingdom, which saw a decline. This country mainly ships liquid bulk cargo to the Netherlands. 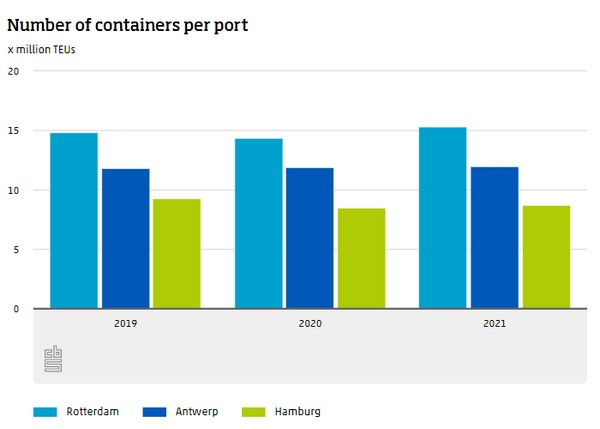