Turkish sugar apricots set the tone. Although they certainly met with a friendly demand, their prices crumbled on several occasions as a result of the supply. According to BLE, Spanish and Italian batches were not always convincing in terms of quality, which is why pricing was sometimes difficult. French articles had no problems with regard to their organoleptic properties: The very exclusive fruits were the most expensive, behind domestic ones. 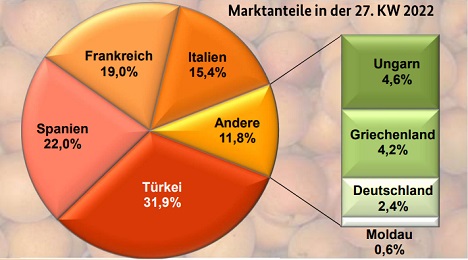 Domestic products arriving in Frankfurt, Hamburg and Berlin generally had a complementary character and cost between €3.60 and €5 per kg in Frankfurt, depending on coloration, brand and aroma. A complementary status had imports from the Republic of Moldova, which were the cheapest overall. Hungarian and Greek lots appearing in Munich rounded out the range of goods with small quantities. All in all, prices tended downward rather than upward, although sales had certainly improved. 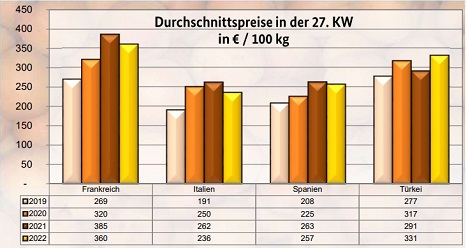 Apples
Slowly, the sales period of the alternative European articles turned into the home stretch. The availability of German, Italian, Dutch and French offerings was now noticeably reduced. Nevertheless, the demand could be satisfied, because in return the imports from overseas increased.

Pears
Demand was very weak. It could be satisfied without difficulty. Prices often crumbled as the products revealed more and more problems regarding their condition. Thus, sellers had to lower their prices for the dominant South African batches as well as for the complementary Chilean and Argentine batches.

Table grapes
The range was diversified, with an increasing number of different varieties being offered, especially from Italy. The presence of Sugraone obviously expanded, with Victoria and Red Globe also gaining some relevance. In general, demand was quite friendly, but the prices nevertheless tended downwards.

Strawberries
Domestic offers obviously dominated the event. In some cases, demand could not be fully met, as open-grown goods became scarce in the meantime and Frigo goods could not completely fill the supply gap. Overall, however, business was very quiet.

Cherries
The presence of domestic fruit increased once again. These deliveries now predominated, also because Turkish imports had decreased. The quality of the lots of these two origins was generally convincing: coloration and caliber appealed to the buyers, which is why they were eager to buy.

Peaches and nectarines
Spanish shipments dominated, more so than Italian shipments. French deliveries completed the picture, as did Greek deliveries to a lesser extent. Demand was noticeably reduced due to weather conditions and vacations. Prices frequently trended downward, which in some cases revived marketing somewhat.

Lemons
Spanish offers predominated in Munich and Berlin, Argentinean ones in Cologne and Hamburg. In Frankfurt, South African imports set the tone. Overall, interest was not particularly strong; it was satisfied without difficulty.

Bananas
Marketing was fairly unexciting with no particular highlights. Demand was met without difficulty. At times, availability was so extensive that accommodation was limited further.

Cauliflower
Domestic supplies dominated almost monopolistically, with only occasional access to Dutch and Belgian items. The supply situation had not changed significantly. Sometimes interest lagged a little behind availability.

Lettuce
In lettuce, domestic and Belgian lots shared the market almost equally. The latter had qualitative merits and were therefore slightly more expensive than the competition. Iceberg lettuce trading was quiet: Domestic and Dutch batches were handled at a steady rate.

Cucumbers
Prices rose, in some cases quite sharply. This was seen in Dutch, Belgian and domestic cucumbers, as well as in Dutch mini cucumbers. The reasons were promotions by the food retailers, which melted the availability at the place.

Tomatoes
Dutch and Belgian shipments apparently dominated the scene. Deliveries from Germany, Italy and Poland were at most of a supplementary nature. In Frankfurt, the first domestic round of tomatoes appeared, costing €8 per 6-kg package.

Sweet peppers
Dutch offerings formed the basis of the range, which was supplemented by Belgian and Turkish imports. Demand was easily satisfied. Nevertheless, prices rose in some places as accommodation had improved.