After two years of virtual editions due to the pandemic, Enza Zaden has once again held its Melon House Fair in Murcia (June 27 to July 8) in a face-to-face format, combined with online at a global level for those who could not travel to its facilities.

"In addition to allowing meetings with producers, this event has been focused on the establishment of contacts with distributors, so we have sought to have an approach with a wider perspective and offer a more holistic view of the melon and watermelon market. Different perspectives are therefore brought together, generating value for all," said Giuseppina Inturrisi, Marketing Specialist of Enza Zaden. 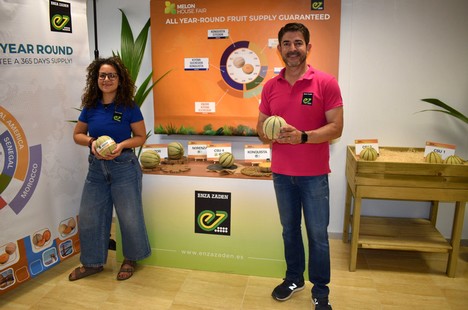 The seed company has opted for new varieties to close a full annual production cycle, with resistance to powdery mildew and aphid and consistency in terms of flavor at different planting dates. It also took advantage of this opportunity to present its innovations in pumpkins.

"As for resistances, while it was previously assumed that these were only of interest to the producer, the entire chain is increasingly involved, since, in addition to good yields, it can ensure a safer supply with a lot less waste. To guarantee the supply throughout the year, our programs rely on different production zones and resistances, with varieties that always have the same flavor so that consumer expectations can be met," said Giuseppina.

Yellow melon, the one with the highest increase in consumption and whose size is increasingly smaller
According to Miguel Salinas, Product Manager for Cucurbitaceae at West Europe, the area planted with yellow melon continues to grow in Spain in response to the rising demand from the United Kingdom, as well as from northern European countries such as Germany and the Netherlands. "One of the reasons why yellow melon consumption is increasing is the improvement in fruit quality and flavor in recent years," he said. 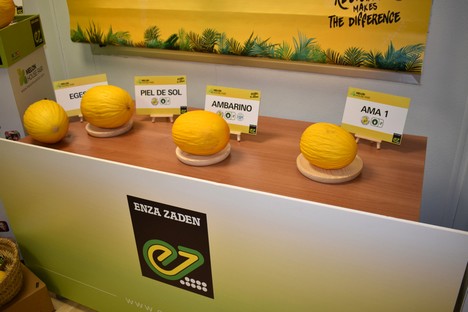 The company is launching a new variety for the late segment in Murcia and Castile-La Mancha, with a size ranging between 1.5 and 1.8 kg, which is the most demanded by the market.

"We fully closed the cycle in Piel de Sapo melons, with which we are growing the most in terms of market share"
"Enza Zaden is already a major player in the Piel de Sapo melon market," said Miguel and Giuseppina. "In Spain we have already closed the entire production cycle, with a full program and with resistance to powdery mildew and aphids, covering all areas. The novelty this year is a new variety (which does not yet have a commercial name) for the late areas of Murcia and Castile-La Mancha. The areas of Brazil and Senegal were already covered. Barroso is also starting to be sold in Almeria for greenhouse cultivation, with a very good reception, complementing the Campuzano, Camacho and Alcarez for Murcia, and the Almadén and Alcarez for Senegal and La Mancha. 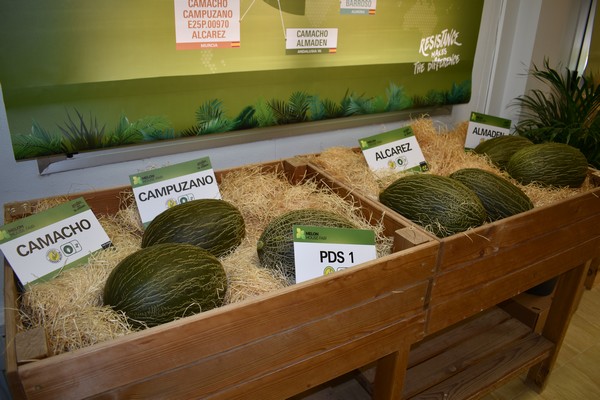 "We have achieved our greatest market share increase with Piel de Sapo melons. We have completed the cycle with uniformity in terms of flavor and juiciness. Meanwhile, we continue to make progress in the breeding of mini Piel de Sapo melon varieties, working with the same parameters applied to conventional Piel de Sapo melons," they say.

New Galia melon varieties with resistance to powdery mildew and aphids
As for Galia melons, the company is launching the new varieties Bernal and Maioral, both resistant to powdery mildew and aphids. The Bernal is intended for the early segment in Murcia, guaranteeing good size, easy setting and a large production, while the Maioral is intended for late transplants - from April and May - in Murcia and from May to June in La Mancha, with easy setting, uniform size, good internal quality and great conservation on the plant. 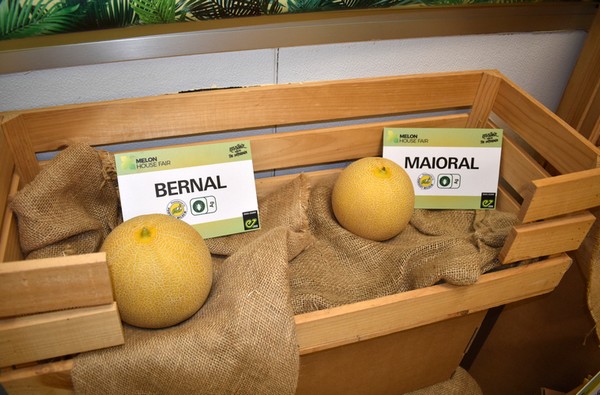 "The Galia is a melon for the high-volume market, as opposed to the melons for domestic consumption, such as the Piel de Sapo in Spain, the Branco in Portugal or the Charentais in France. We have managed to get our varieties to indicate very clearly when it's the perfect time for them to be harvested."

New Cantaloupe variety, increasingly closer to the taste of a Charentais
Melon consumption has fluctuated quite a bit in recent years. "There is more and more competition on the shelves with other fruits such as mangoes, pineapples, kiwis, etc., and this is something that affects melon types such as the Cantaloupe or Charentais. However, the improvement in terms of quality and homogeneity in flavor throughout the production calendar is allowing consumption to grow in markets such as Dubai, in addition to the traditional destinations of Europe and Asia. 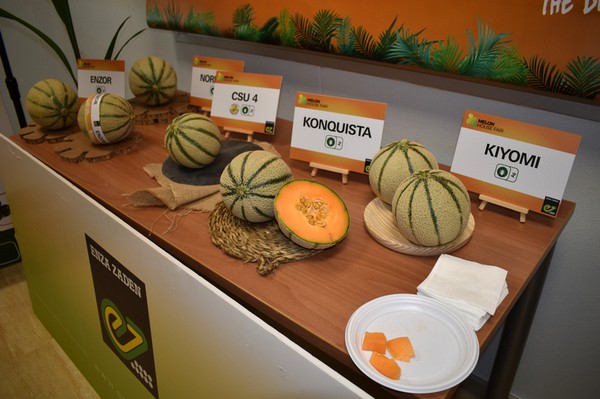 Cultivation in Central America is highly widespread and varieties of ours like the Konquista are proving to be a good ally both for growers in different areas and for distribution chains. It is a Cantaloupe that is getting closer and closer to a Charentais in terms of flavor. In Brazil, it has managed to maintain its quality, despite the rainy season," said Miguel Salinas.

As a novelty, the seed company is launching a new variety (still without a commercial name), with characteristics similar to those of the Konquista, adding resistance to powdery mildew and aphids, for cultivation in late areas of Murcia and La Mancha, and which indicates very clearly when it's ready to be cut in the color of its skin. 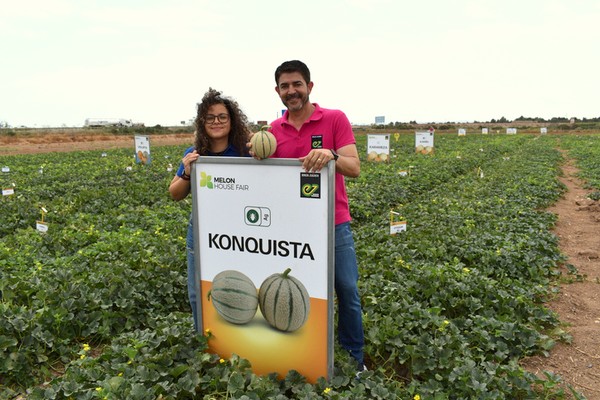 In the Charentais market, Enza Zaden has made great progress in terms of aphid resistance with the Renaudot, which complements the Pleiade. "Due to the pandemic situation, with the logistical and profitability issues it has caused, the acreage in France has been significantly reduced in the last two years. We work with Charentais melons adapted to the needs of each growing area," says Miguel Salinas.

The Sugar Baby segment, the fastest growing in the watermelon market
In the watermelon market, the company is offering a new product in the Sugar Baby segment that will soon have commercial status. In addition to this novelty, which ensures a great production and flavor, the Rio Grande stands out in the striped watermelon segment. The Rio Grande's main market is the US, but it has also been very well accepted by Spanish producers, since it could be introduced in the fresh cut convenience food segment. 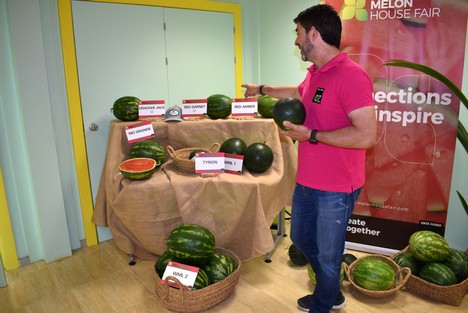 The company now has a new mini Sugar Baby watermelon, Tyrion, which weights between 1.8 and 2 kg. The Tyrion is characterized by having a very vigorous plant, which leads to a great production, as well as a great flavor and post-harvest qualities. Another of its main attributes is its firm skin, which gives it an edge when it comes to handling and transport. 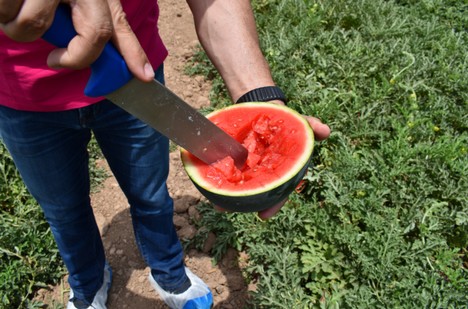 "We see that there is great potential for the Tyrion in the European market. It has the required caliber and flavor to meet the needs of European consumers," says Miguel Salinas.