Mart Boender: "The lettuce is bursting out of the ground"

Open field lettuce growing well, but the market is tough

"This is growing weather. The lettuce is bursting out of the ground," says Mart Boender. This grower has about eight hectares under Lollo Bionda, Lollo Rossa, and red and green oakleaf in the Netherlands. While cultivation is going well, open field vegetable sales are quite dramatic, he says. "that often happens for a while, but it's been bad for longer now. I get the feeling consumers' spending patterns have become more careful."

Of Tuinderij Boender's acreage, almost half is Lollo Bionda, 40% is Lollo Rossa, and the remaining ten percent the oakleaf. Mart harvests his open field lettuce from early May until late October. According to Mart - who runs the business with his wife Janske - the heat is not currently an issue for the crop. "The quality is fantastic, but if the heat continues, it could become more problematic," he says. 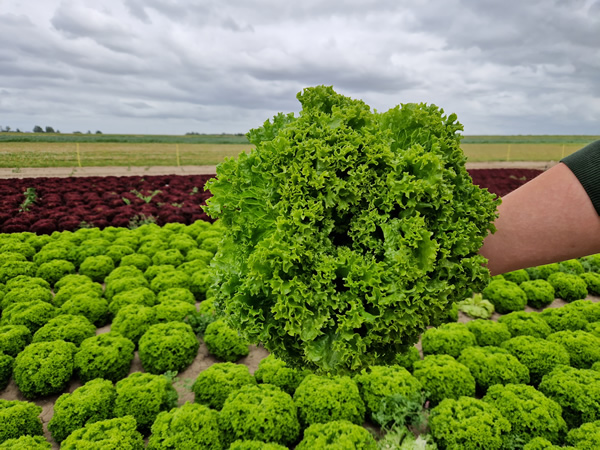 "There's plenty of lettuce from greenhouse cultivation - hydroponic or not - too. And the Italian varieties have also found their way onto the market well. Nevertheless, I believe in Dutch open field lettuce's future. We have hardy lettuces with a longer shelf life. They must be able to reach the many export markets Dutch exporters serve. Local supermarkets are happy with Dutch produce in the summer. We currently have plenty of locally-grown lettuce to supply," Mart concludes.