Supplies of watermelon this season out of California are slightly down. “In the West, due to drought and COVID uncertainties, the acreage on watermelons is off by about 10 percent. The quality of the melons is good but we’re just down in acreage,” says Dennis Peterson of Riverbend Fresh LLC who says production in California is from the West side from Bakersfield to Sacramento.

As for when the season started, it was mixed. “I was actually earlier to start in one field while others were on time. Other people started later because they planted later--they weren’t sure about the water. Some didn’t plant at all due to the water situation or they allocated that water to trees they have,” he says. Production will stay in that region until mid-September.

Meanwhile, demand is steady and good for watermelons, a fruit that picks up in popularity as outdoor temperatures rise. “The markets are at least 10 percent to 15 percent higher which is good and demand exceeds supply. We limped through the 4th of July--everybody was able to buy watermelon. But people coming back to reorder right now it’s still on the snug front,” Peterson says. 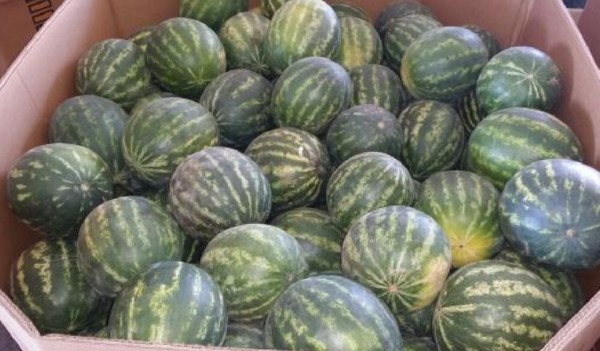 Local production coming on
While July 4th watermelon pricing was comparable to previous seasons--maybe only a few percentage points higher--the price has since picked up by about 10 percent. “I think pricing will stay there because random parts of the country come in with watermelons--backyard gardens, fruit stands and more,” he says.

It’s a slightly different picture from the 2021 season where Peterson says there was more acreage and demand felt somewhat stronger. “This year there’s good demand on what we got but if we had a bunch of melons planted, I think we’d be in trouble. The economy’s not that good--it’s good the acreage is down but we’re a few acres away from being the opposite,” he says.

Looking ahead, as the weather turns cooler again in mid-September and this region’s growing cycle ends, bins of watermelons on retailer’s floors will be replaced by smaller displays to make room for fall items. Production will also shift back down to the Arizona desert and also to Baja California, Mexico and offshore.