The volumes of Spanish table grapes are gradually increasing as the harvest progresses in the early areas of the Region of Murcia, located on the coast.

"The harvest began at the end of July with nearly a week of delay this year due to the cold and rainy weather in the flowering months, although this has mainly affected the extra-early varieties," stated David Franco, commercial director of Grupo Paloma. "The upcoming varieties will be harvested on their usual dates," he added. 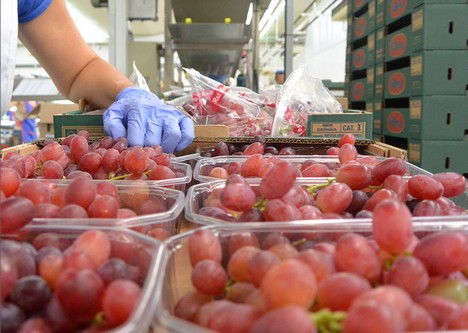 According to David Franco, the company expects to produce as much volume as in a normal campaign. "The weather after spring, which had its cold episodes and rains, has been hot and dry, benefitting the development of the fruits in the field. It's a very promising campaign because of the quality of the grapes this year. Everything looks great for the months of July and August."

The company has about 300 hectares of its own table grape production and it has fully completed its varietal renewal plan for this campaign.

"Although it is a large production, we treat it with the same care as if it were a small plantation. We supply seedless table grapes for 16-18 months and, although we have already grown in varieties that provide us with value and a good supply in July, we are now growing in varieties for the final campaign phase, in October," stated David Franco.

"Table grapes are not a staple product among consumers, so it is important to improve the varieties. Regardless of the varieties, it's also essential to make every effort to achieve high-quality standards," he said.

"Last week we started to place our product in European supermarkets. We expect consumer demand to be good, just like last year at the beginning of the campaign. It's worth noting that our campaign coincides with the campaign in Italy, although with generally different varieties and markets. In July we compete more strongly with the Egyptian product, which has gained presence and positioning in European markets for its prices. In this inflationary context, our proximity due to our geographical location gives us an advantage. The global logistical situation is causing shipments per container to have become exponentially more expensive and there are no guarantees on when the products will arrive or on their quality. Road transport is a guarantee at the moment," David Franco stressed.