The Drapeau system is an older training system used mainly for stone fruit. The system allows the opportunity to develop a fruit-wall without very high-density planting.

"It was reintroduced during the late nineties by the Swiss grower Beat Lehner. Beat refined the system and adapted some changes, but the principles remain the same:

Dividing apical dominance over several points (branches) rather than just the natural top of the tree makes management of the trees much easier and calms down trees and makes them fit a 2D system," explains Leon Jahae from Top Fruit Consultancy. 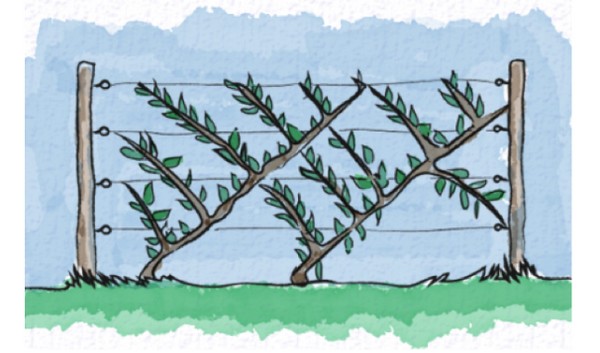 Simplification of the Drapeau system

"2D systems will allow future robot picking, but for now, the main advantages are uniform fruit, easier husbandry, and higher/better picking performances. With 2D systems, we go from M3 production area to M2 production area. With M3, there is always "a darker inside" of the tree. In a 2D tree, there is "no inside" or shaded area."

The system is in place in several cherry and plum growers in Scotland and England.

"The system allows the opportunity to develop a fruit-wall without high-density planting. Comparing wall systems, using high-density plantings of 4,000 or more trees per hectare have the risk that, if they do not produce high yields in the starting/early years, the additional costs of establishing the system will be eliminated completely. Also. growth control at a later age can be a potential problem." 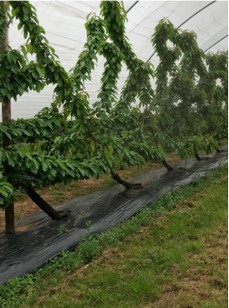 The Drapeau_Lehner wall may take slightly longer to get into production but, when fully established, has all the advantages that a fruit wall can offer without the additional costs and risks involved.

Photo: Drapeau cherries with table-top in the lower part for frame support

"Plum and cherry trees (Prunus species) have one important characteristic that the trees are apical dominant, which basically means that trees are extremely strong "top growers" and therefore often lose the vitality in the lower part of the trees. Strong apical dominance, if not controlled correctly, can lead to a serious reduction of light distribution in the lower part of the trees meaning a quality reduction in the production of wood and reduction in fruit quality. Trees are planted under a 45-degree angle, and for that reason, we do not need to reduce or interfere at an early age of the trees to reduce the height."

Often, a big problem is that pruning in the tops of the trees (to reduce/limit height) results in even stronger top growth and less vitality in the lower part of the trees. It is also a good way to reduce the height, and picking from ground level becomes easy. Side shoots above the original frame are "tied in" under a 90-degree angle from the central axis. They take a substantial part of the apical dominance away. 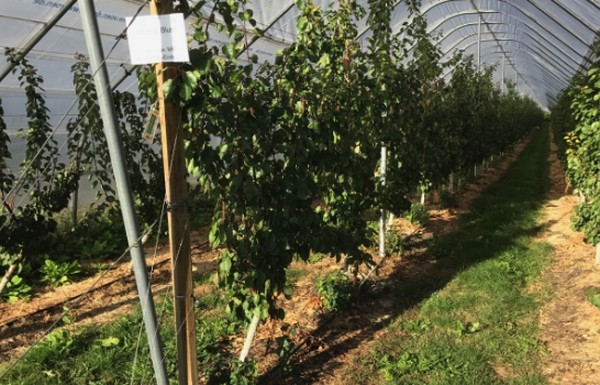 Leon works mainly through Agrovista as an independent consultant covering England but also Scotland and Northern Ireland. His specialty is tree husbandry (including planting systems and developing new systems) and also tree nutrition for stone fruit and pip fruit. He also works with growers and grower's organizations in Central and Eastern Europe, Kashmir (India), and had made progress in China until Covid started, which has made it impossible to visit due to restrictions.

Leon advises on the Drapeau system in the UK and also abroad. "I am not only fixed on this system. I promote it, but if growers have other views, then I will support them also on other systems. The Drapeau is my (personal) favorite system."