Two apple orchards located in regions VI and VII, which had more than ten thousand plants replanted with the Rosy Glow variety without authorization from ANA Chile, were recently uprooted and all their plant material destroyed. This happened by virtue of preliminary agreements reached between ANA Chile (exclusive licensee in Chile for this variety) and the respective producers. These agreements also contemplated the payment of compensation. 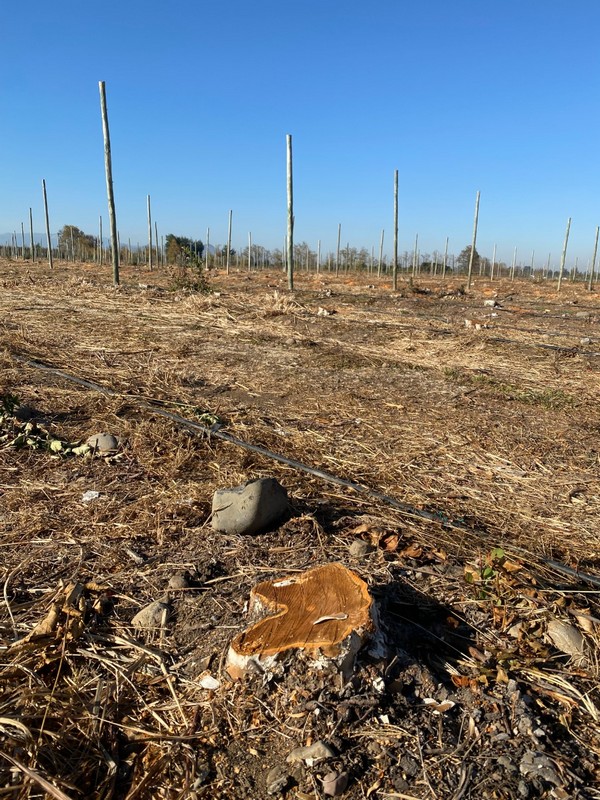 n an effort to control illegal plantations of protected varieties, that is, those that don't have the corresponding license, the Department of Surveillance of ANA Chile has been carrying out a program that contemplates the verification of orchards of the varieties that the company controls, verifying that these, in fact, contain the number of plants that have been acquired from the licensed nurseries and that the volume of fruit produced is in accordance with said plantation.

"Having to uproot orchards is a very unfortunate situation, but we believe it sends the right signal to the industry. Producing fruit from illegal plants is detrimental to those producers who are licensees and who do respect intellectual property", stated agronomist Teresa Molina is in charge of the Surveillance Department of ANA Chile. "These control actions are very necessary. Chilean producers have paid royalties for more than three million plants of this variety, acquiring the rights for their plantation and fruit production, rights that must be protected."

Molina also leads other initiatives of ANA Chile along the same line. "This season we have made, among other actions, considerable communication efforts to create awareness in the industry through advertisements, publications in magazines, explanatory videos, etc. We know we need to make cultural changes that take time, but we believe and trust in our producers and their responsibility."

The development of a new variety of fruit through traditional crosses can take 10 to 15 years. This involves hard work on the part of geneticists or breeders and involves a huge investment of resources. Subsequently, they must be taken to the country where they plan to grow them, where they must undergo quarantine and agronomic evaluation processes, which take at least 5 or 6 more years. That's why the intellectual property of every new variety that is positively evaluated must be protected.

ANA Chile will continue its surveillance programs during this and future seasons, visiting nurseries and productive orchards to protect the interests of all participants in the value chain that work to generate and offer the industry new varietal opportunities, including the rights that producers and marketers have legitimately acquired through the payment of their royalties."