The scorching heat and record high temperatures in Hungary over the past two weeks, just as the local watermelons season was starting, have caused the watermelons to ripen earlier, shortening the growing season but resulting in good sugar content and colour for the Hungarian melons. Unfortunately this also means somewhat reduced  expected yields. 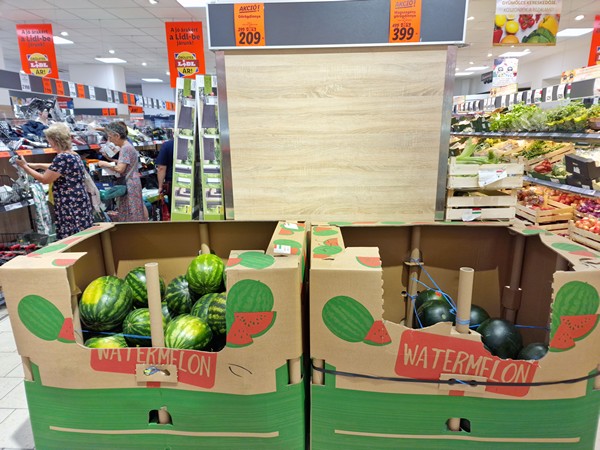 “When it is 38 during the day and hot at night, the external colour of the watermelon is not so good. European growers have a solution for the heat. They use anti-uv “shadow” spray. It decreases the UV radiation on watermelons. It acts like a shadow with a layer on the skin. The last few weeks have brought extremely sunny and warm weather, and the last 10 days have been particularly hot, with higher-than-optimal peak temperatures. In the southern part of the Great Plain, conditions tending to an atmospheric drought have developed, but in the Transdanubia the weather conditions have remained close to optimal, with plenty of sunshine, little precipitation, and no drought situation has developed in the western half of the country,” said László Sándor, BASF and Nunhems consultant, to Hungarian agricultural platform FruitVeB, about the unexpected development of the Hungarian watermelons season that has just started at the end of June.

Expected yield below average
“Crop averages are expected to be slightly below average, and the production area in Hungary has also decreased: currently, approximately 2,600 hectares of watermelons and 400 hectares of cantaloupe can be counted on, i.e. the total production area will be around 3,000 hectares this year. At the same time, there were fewer extensive areas that had to be replanted, which already meant a lower than average yield, i.e. the intensive, high-yielding areas remained in production. These conditions resulted in this year's crop being around 120,000-130,000 tons, but if the drought continues, it is expected to be closer to 120,000 tons,” says Sándor.

According to FruitVeb there is import pressure on the Hungarian market, since free-range picking has started in all Mediterranean countries and the surrounding areas of Macedonia, Serbia, Albania, etc. In addition, warm weather prevailed in these countries, but no reports of excess exports to Hungary have been received so far. At the same time, due to the increase in cultivation costs, a further decrease in the European melon-growing area is expected.

“Our export opportunities are still a given, our primary destinations are Slovakia, the Czech Republic and Poland, as due to our geographical location we can deliver to these countries with lower transport costs. This year, producers' costs have risen by 30-35%, and as a result, consumer prices must inevitably rise as well. Unfortunately, judging from the experience of several countries, producers benefit little from the increase in consumer prices, even though they are hit the hardest by the increase in the prices of fertilizers, film and fuel,” says Sándor.

The domestic season started at the end of June with the larger truckloads starting to appear in the supermarket chains from the beginning of the week. “The harvest will be sufficient to ensure the supply of the supermarket chains, which means that we can buy a large number of Hungarian melons in the shops this year as well, there is no need to fear a shortage of goods. On the one hand, there will be Hungarian melons in stores, and on the other hand, thanks to the abundant sunshine, the quality promises to be excellent,” concluded Sándor.