At this point in time, early table potatoes are apparently dominating the market. At the same time, the presence of domestic offers has obviously expanded, the BLE reports. With Colombo, the assortment in Frankfurt was expanded. Demand was not particularly strong; it was easily satisfied. In some places, sales had become limited after the end of the asparagus season. This was one reason for discounts. Another was reduced incoming demands. And, of course, the increased deliveries also played a role. So prices often dropped. This was sometimes also the case for imports from France, Italy and Cyprus. The supply of ware potatoes thinned out continuously. However, domestic, French and Dutch offers were convincing in terms of quality and were handled at a steady rate. 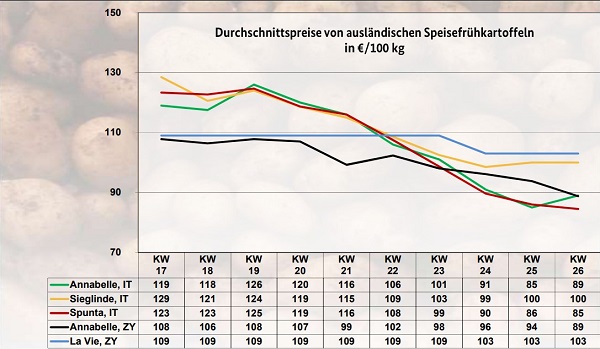 Rhineland-Palatinate: Quiet, stable consumer demand
The grubbing operations are progressing well. So far, yields of early potatoes (300 - 320 dt/ha) and quality is satisfactory. Quiet consumer demand, with good supply conditions, is slightly below expectations, but stable despite the heat. Producer prices remain at the previous week's level. Contrary to expectations, potato acreage for the main harvest has increased by 2% in the main EU growing countries (D, B, F, NL), according to initial estimates by the Rhineland-Palatinate Chamber of Agriculture. 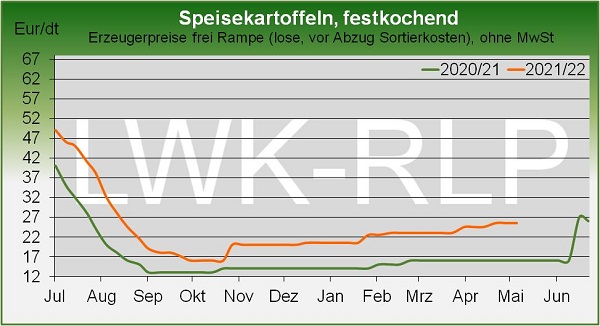 Hesse: Stable price development
On the potato market, sales are reported to be within the usual range. The sale of imported goods is coming to an end. Increasingly, local origins are being marketed, or in some cases supplemented by supraregional supplies. Except for minor corrections, prices remain unchanged from the previous week. For the next week, a stable price development is expected. At some locations, the drought is making digging conditions more difficult. Rain is also urgently needed for the late connection varieties, reports the State Office for Agriculture in Hesse. 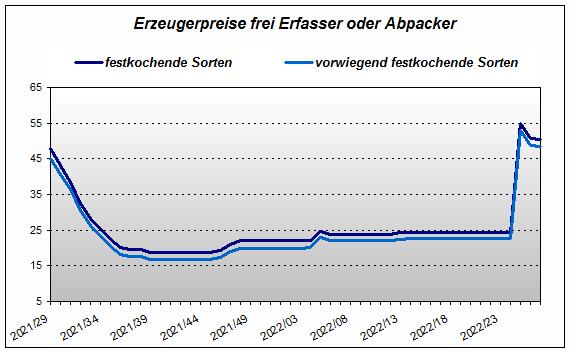