At abbGrowers, the Serbian blueberry season has already ended. "It was a short, intense season," says Fred Douven. "And there was an immediate follow-up because all countries are early this year. Currently, the Netherlands, Romania, Georgia, Ukraine, and Poland are all in production, so they're releasing huge volumes."

"Sales were difficult this week. The blockades in the Netherlands didn't help either. Those even affected the export markets - German supermarkets wanted to know if the borders were closed. It didn't come to that, but it did cause a lot of unrest. Prices are now coming under pressure too. The Netherlands expects hot weather next week, but it's already hot in many places in Europe. If it stays this hot, the season will be accelerated. The fruit will ripen a little faster and so will be smaller, here and there," Fred explains. 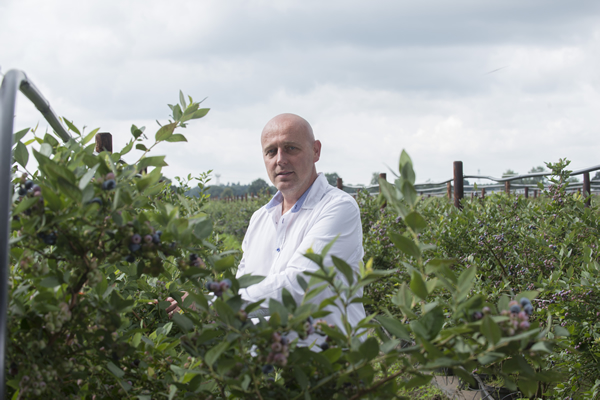 "Fortunately, blueberries sales continue well. There are quite a few promotions, and consumption is high. But in some countries, summer vacation has already begun, which always affects berry consumption. Combine that with the high production, and I expect a tough few weeks. Fruit and vegetable sales, in their broadest sense, seem more subdued anyway. There's plenty of uncertainty in the market, and every conversation seems to include the word, 'crisis'."

Fred considers the emergence of new varieties a positive development. "The Sekoya variety program, in particular,  is doing extremely well. That variety is truly the queen of berries. We can barely keep up with that demand," he admits. "In fact, it's the opposite of the rest of the blueberry market. In the Netherlands, we're in the third production year, so still in the start-up phase. Nonetheless, we have about 80 tons available this year. We see nothing but blue skies ahead."

"We're also eagerly awaiting the new import season with harvests from our growers in South Africa and Zimbabwe. I was there again recently, and those crops look promising. The first berries are already ripening. We're exporting most of the first harvest to the Middle East. The Peruvian season, too, will be great; after all, that goes into overdrive every year," Fred concludes.