Tons of watermelons reported stolen in Almeria, especially in the Levante region, due to price increases in supermarkets.

Asaja is reporting an increase in theft in the current open ground campaign, "especially in the Levante region." 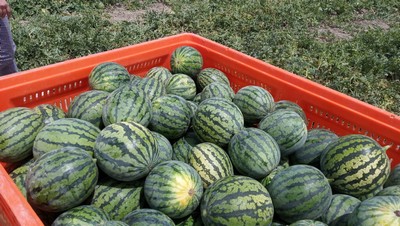 "The main reason for this is the increase in the fruit's price in supermarkets. Prices are up to three times higher than those recorded last year, so watermelons have become a luxury product for many consumers," says the agrarian organization.

However, it should be noted that, despite this significant increase, producers have not seen their profits increase in the same rate. "The thefts reported in recent days could have a devastating impact on the growers affected, who had hoped for this campaign to make up to some extent for the dismal profitability of the previous campaign," says the provincial president Adoración Blanque.

Therefore, Asaja calls for "a greater presence of State Security Forces and Corps in the area, as well as for the implementation of specific measures to stop theft in the Levante region of Almeria. Those affected have also been reminded of the possibility of bringing the events to the attention of the ROCA groups, who are dedicated to preventing theft in agricultural and livestock facilities in rural areas.

The organization points out that "we are not talking about small quantities, but about entire harvests being looted, with up to 3,000 kilos being stolen each time. And in addition to watermelons, the materials that growers have in their farms, as well as fertilizers, etc., are also being looted. That is why more security forces are needed, and it is also essential for producers to report all such acts of vandalism."