The new Vado Express feeder service will connect Port Said East, located on the Suez Canal where it meets the Mediterranean Sea, and Vado Gateway, at the Port of Genoa, one of the most significant and busiest ports in Italy. The new service will reduce transit times and alleviate congestion while offering higher flexibility in current challenging times.

The first vessel from Maersk’s new service (3000 TEUs) will depart from the Suez Canal Container Terminal (SCCT) on the east bound lane of the Suez Canal, on July 8th and will arrive at the APM Terminals Vado Ligure on July 14th. The service considerably reduces transit times from Asia to Northern Italy by between 5 and up to 22 days, depending on where the cargo departs from Busan in Korea or Shanghai, Ningbo, Yantian, Shekou or Xingang in China. 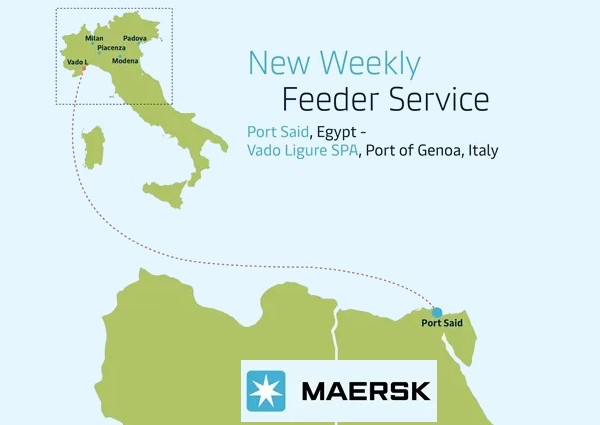 ‘’We are very proud Maersk decided to use our Terminal for such an important new ocean service,” commented Paolo Cornetto, Managing Director of Vado Gateway. “Vado is a new state-of-the-art gateway terminal which has demonstrated excellent performances since we opened two years ago. We guarantee that providing a reliable, proactive, transparent service to Maersk and its customers will be our daily obsession!’’

The semi-automated terminal, Vado Gateway, is one of Italy’s fastest and most advanced gateways for growth, while its low CO2 footprint contributes to APM Terminals and customers’ sustainability pledges.

Vado Gateway offers customers supply chain efficiency and speed – with unprecedented fast turn times for trucks, a fast and flexible corridor connection and no congestion for vessels with berthing on arrival.

Vado Gateway’s on-dock rail also provides rapid access to Southern and Central Europe. For access to northern Italy the terminal offers an AEO certified fast corridor to and from Milan, Rubiera, Padua & Piacenza – as well as the possibility to create any new connections in 30 to 45 days.”

Recording breaking productivity at SCCT
The Vado Express departs from SCCT, in which APM Terminals is the majority shareholder. In 2020, SCCT initiated a USD 60-million investment in equipment and capacity upgrades at the terminal. 12 out of 18 of the terminal’s STS cranes now have the capacity to handle ultra large container vessels (ULCV). This also makes SCCT the only terminal in Egypt to be able to simultaneously serve two mega vessels, without compromising on productivity.