Pitahaya fires up the imagination of Boland fruit grower

Louw de Wet doesn’t much like the name dragon fruit, preferring to call it pitahaya or fire fruit – a fruit that has fired up his imagination ever since he first saw it in a photo seven years ago.

He has himself had to verify the variety names of plant material he’d received from elsewhere in the country, which brought him in close contact with the plants, getting to know them inside out 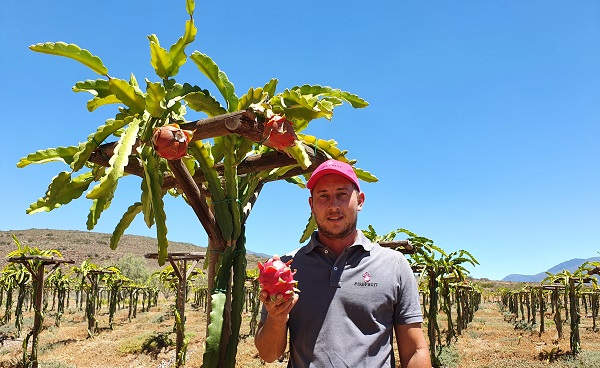 Louw de Wet with pitahaya, locally known as dragon fruit but he likes the name his wife has given them: fire fruit

He eventually imported around 70 pitahaya varieties from Asia as well as more of the ones he’d had to doublecheck its identification (he says many varieties are known by various names) and he is now evaluating these.

There is believed to be approximately 135 pitahaya varieties in the world, he notes.

“There’s definitely opportunity but the market globally only has opportunity for good-tasting pitahaya. A lot of groundwork will have to be done to convince people that dragonfruit can actually have a good taste,” Louw de Wet, sixth-generation farmer on Retreat, in the Agterkliphoogte Valley outside of Robertson. “Tasteless fruit has hurt the category, but you do get varieties with a very good taste and commercial characteristics.” 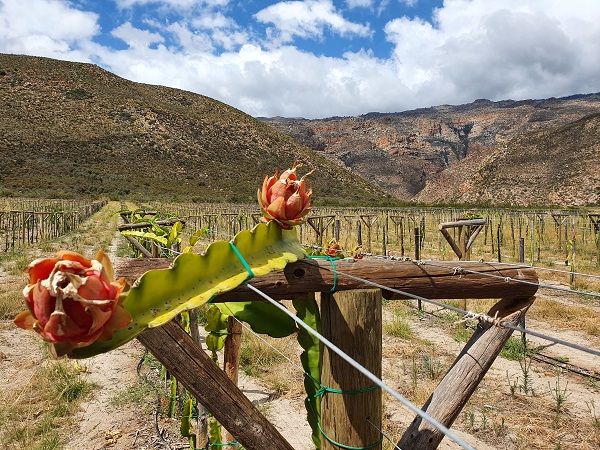 Pitahaya (also known as pitaya) is very suitable to areas with water scarcity, as on Louw's farm which is wholly dependent on rainfall and snow on the high peaks

The extreme ease of propagation of the epiphytic cactus has had a double-sided effect: on the one hand, it facilitated the distribution of tasteless varieties, which dents consumer enthusiasm, but conversely it can also easily increase access to better-tasting varieties, he says.
Louw plans a pitahaya nursery to supply local growers with the best-tasting varieties that he is identifying from his evaluation block.

Pitahaya flowers open for one night only, so it has one opportunity to be pollinated and on certain varieties cross-pollination is very important, he says. 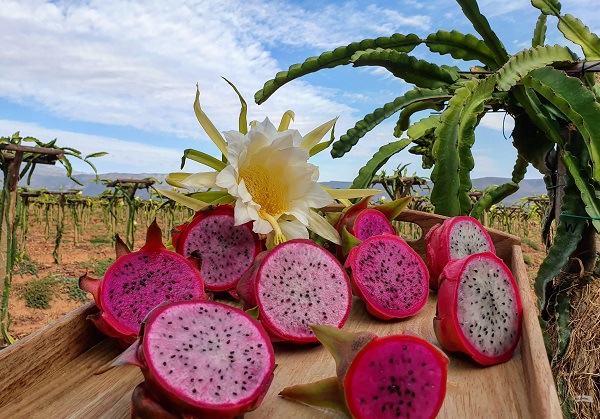 Importance of the Dragonfruit Growers’ Association
Currently the largest crop on Retreat, area-wise, is still wine grapes, as well as citrus (soft citrus, lemons and late navels), apricots and, increasingly, pears (which are replacing peaches). 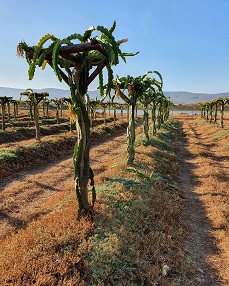 Louw plans significant expansion of pitahaya over the coming years, ideally between 15ha and 30ha which will give him the volumes to negotiate with retailers, along with the strong volumes building up from other parts of the country, mostly in Mpumalanga and Limpopo.

He feels it is imperative for the development of a Southern African pitahaya (or dragonfruit, as it is locally called) industry that growers join the Dragonfruit Growers’ Association of Southern Africa and he points out that there are more pitahaya plantings than might be expected.

“We have water restrictions and pitahaya is a water-wise plant, which is one of the factors that can give it a higher turnover value per hectare when comparing water use, than some of the other crops we have,” he says.

South Africa has an export window to the EU, UK
For the next few years his focus will remain on the domestic market, he wants FireFruit pitahaya to become a well-known name among fruit lovers. The response to their fruit at food fairs has confirmed his conviction that consumers just need to meet the right pitahaya. 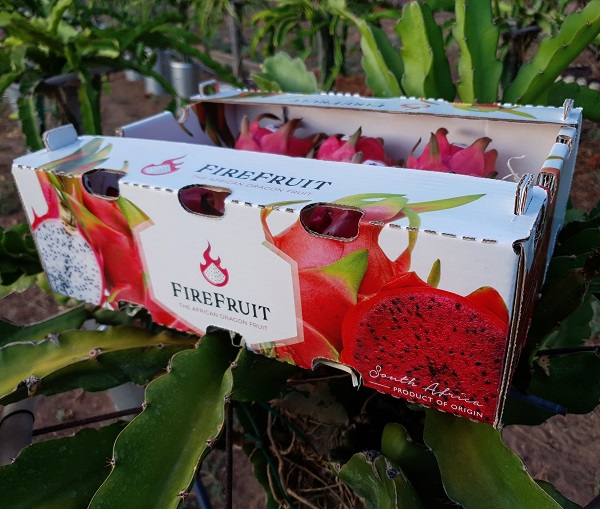 Much work still needs to be done, not only in convincing consumers, but also in educating stores and retailers of the pitahaya’s postharvest handling and need for refrigerated display, not open display as one often sees in local supermarkets and greengrocers.

He adds that producers should not be selling their fruit at unsustainably low prices, which hurt the market. He believes a minimum price is R30 (1.76 euro) per kilogram to cover costs.

Exports (all airfreight) might be a possibility later on when the ceiling domestic consumption has been reached. South African pitahaya is harvested at a time that Vietnam and China aren’t yet in full production, from January to March.

The northern parts of South Africa start their pitahaya harvest a few weeks to a month ahead of the Cape, where the peak weeks run from March until May. 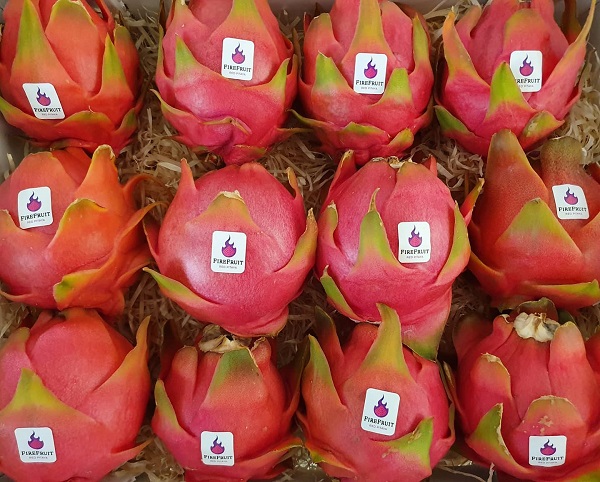 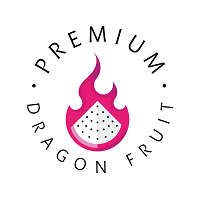