Optical sorting lines have rapidly gained in importance over the past decade, especially in the potato, onion and field vegetable sectors. One of the driving forces behind this technological development is the Swiss company Visar Sorting. Its Sortop sorting process has now become a standard solution at modern growers, graders and packers both at home and abroad. On the occasion of the open days from June 23 to 25, we spoke with the company's founder and managing director Daniel Pitton about the current state of affairs as well as the future of optical sorting. 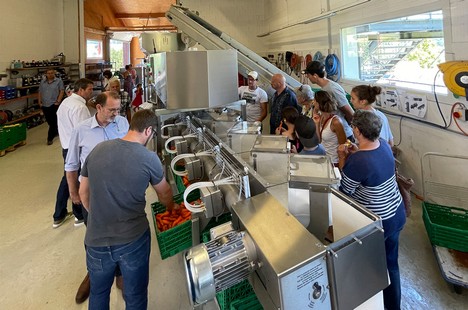 Machine demo at the open house

The company's tumultuous development started with the market hose of the Sortop Carrots optical sorter, which was first used in 2010. In 2015, the second model for optical sorting of potatoes followed, called Sortop Potatoes. Today's product range is rounded off by the Sortop Multi, a sorter for tubers and carrots of all types. Pitton: "Regardless of the product, the needs of our customers, whether packers, wholesalers or growers, are virtually the same everywhere. People are faced with a continuous shortage of skilled workers and rising minimum wages, which is why highly automated solutions are urgently sought."

The Swiss machinery supplier's technical expertise is particularly unique in the potato sector, he said. "In technical terms, potatoes are the most difficult to sort, not least because of the many varieties with different colors and shapes. Here, our solution has proven to be particularly efficient."

According to Pitton, 80 percent of European carrot packing plants are nowadays equipped with an optical sorting system; for potatoes, this proportion is somewhat lower. "In general, demand is currently very high and I believe that demand will continue to increase in the coming years." 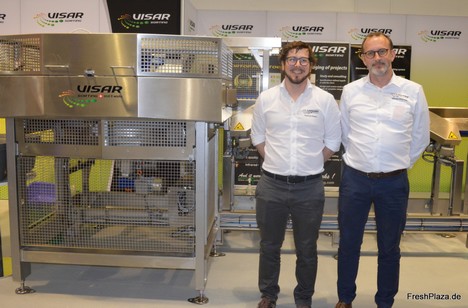 Development potential in Asia and Eastern Europe
Nevertheless, the international potato and vegetable industry is looking back on two difficult pandemic years. Corona had noticeably inhibited investment activity in the industry and planned projects were either suspended or postponed. "On the other hand, Corona also led to an increase in demand and accelerated automation in the industry. This is because using optical sorting systems, it is possible to replace manual sorting almost 100 percent of the time, which was reflected in demand, especially during Corona times, when high infection rates sometimes led to acute labor shortages in the plants."

In the longer term, 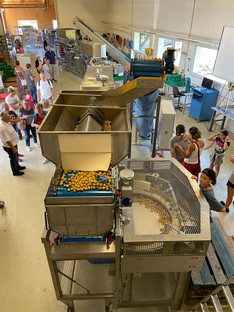 too, according to Pitton, a clear trend toward mechanization can be observed throughout Europe and other regions. "There are definitely massive differences between countries in terms of financial capabilities and wages. In that respect, Northern Europe and the DACH region are doing very well. However, our goal in the coming years is to further advance optical sorting in Asia and Eastern Europe as well." 220 optical sorters have now been installed, mainly at medium-sized or owner-operated companies.

"You don't have to be able to afford a major investment to switch to optical sorting. For example, we also count potato farms with direct marketing among our clientele, and it is a matter close to our hearts to continue to meet their needs in the future."

Despite the proven better performance compared to manual sorting, Visar Sorting Sàrl has set itself the goal of further optimizing the existing process. Says Pitton, "We are working at full speed on a system that distinguishes wireworm infestation from the mold Rhizoctonia sclerotia. The same applies to the detection of internal quality defects in potatoes."

'Swiss Made' as an advantage and disadvantage
Marketing-wise, the 'Swiss Made' label is a strong but challenging market advantage, he said. That's because the design of the plants inevitably relies on high-quality raw materials and services, Pitton continues. "We are also suffering from the high CHF exchange rates, which are squeezing our margins and forcing us to limit production costs as much as possible."

Complicating matters further, he adds, is the current procurement situation for spare parts and electronic components, which is difficult in any case. "We have already converted our machines to several spare parts from different suppliers, which increases the chances of finding the material we need. Accordingly, as everywhere in the industry, supply bottlenecks cannot be ruled out soon."