'The asparagus season was ending, quality-wise and per the calendar'

The asparagus season was ending, quality-wise and per the calendar. According to the BLE, supply and demand continued to narrow. In addition to the dominant domestic offers, there were some Dutch and Polish, as well as green asparagus from Mexico and Peru. Prices on the markets were mixed over the course of the week, but all in all trended slightly downward. 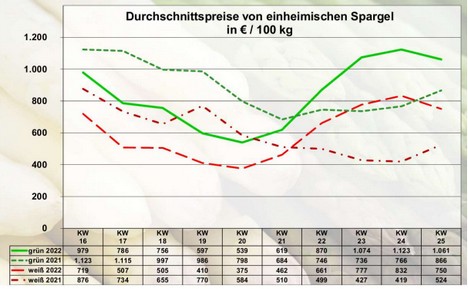 While transshipments in Frankfurt and Cologne proceeded at a slow pace, demand for white domestic and Dutch spears picked up again in Berlin. Here, flawless white 22mm+ spears were priced at €6 to 8 per kilogram. In order to ensure the clearance of the last lots in Munich for the green varieties, the higher prices of the week before had to be lowered.

Apples
Meanwhile, imports from overseas rather formed the basis of the range and gained in importance. Royal Gala from New Zealand and Chile dominated. From there, Breaburn, Elstar and Pink Lady were also increasingly entering the markets. The presence of European lots from the warehouses decreased only slightly.

Pears
South African and Chilean shipments dominated the market, Argentinean goods were complementary. The last Italian Abate Fetel as well as Dutch and Belgian Conference continued to hold their position but hardly attracted any attention.

Table grapes
Italy dominated the scene, with much Victoria and Black Magic being more heavily supplied. Egyptian Prime Seedless followed in importance. India and South Africa continued to lose importance and did not progress beyond a supplementary character.

Strawberries
Quality domestic offerings dominated the scene, pushing the few Dutch ones into the background. Here and there, lots from Poland and Belgium were supplementary. As the sales momentum was not always satisfactory during the week, traders often had to adjust their prices.

Apricots
Spain dominated the scene, more so than Turkey, France and Italy. Greek and Hungarian lots complemented the scene. Domestic fruit arrived towards the weekend in Berlin, as well as in Frankfurt, where they fetched € 19,- to 22,50 per 5-kg box. Here and there, products appeared that had to be offered with discounts because of their conditional weaknesses.

Cherries
The volume of domestic goods expanded noticeably, but quality problems increased. The early midsummer temperatures allowed the fruit to ripen quickly on fully hung trees, resulting in rather smaller calibers. This resulted in a very inconsistent price picture for the same, as demand was preferably for large calibers up to 32 mm.

Bananas
The market a bit slow and the ripeners adjusted the supply to the demand. Thus, the majority of prices remained at the level of the previous week.

Cucumbers
Regarding snake cucumbers, the Netherlands and Germany formed the basis of the range, with Belgium supplementing locally. The demand was quiet but steady. Prices largely remained untouched.