Container-ship building binge is not over yet

The price of newbuild container ships keep rising, but still, liner operators and ship-owning companies keep placing more orders (mostly at Asian yards). This will lead to an ever-larger spate of new vessels in 2023-25. According to Alphaliner, capacity on order has now reached 27.9% of on-the-water capacity. The ratio was a mere 8.2% at the cycle low in October 2020.

Total capacity on order now tops 7 million twenty-foot equivalent units. The next two years will see major capacity infusions: 2.45 million TEUs in 2023 and 2.74 million TEUs — 9.8% and 10.9%, respectively, of on-the-water tonnage. As orders mount, tonnage for 2025 delivery is rising too. It’s now up to 1.13 million TEUs. That’s almost quadruple what was due for delivery in 2025 at the beginning of this year. 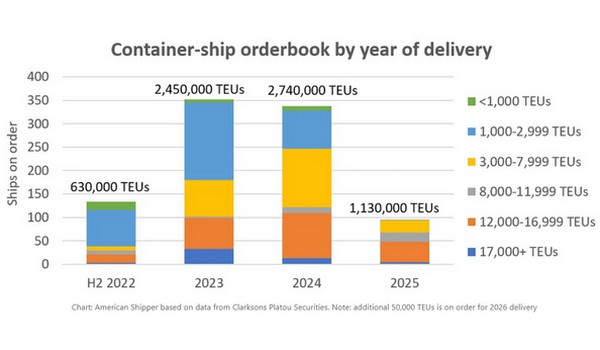 Stifel shipping analyst Ben Nolan: “Last week, 13 more container ships were ordered, bringing the total for the year to 239. This is already the fifth largest year on record for container-ship orders and we are only halfway through the year.”

According to Alan Murphy, CEO of Sea-Intelligence, “The fact that it takes two or more likely three years to build supply is something that’s always been a problem in this industry. [As a result] we’ve always had booms and busts. It’s not uncommon for carriers to overshoot the market. That’s part of the model. You overshoot a bit and it balances out over time. And it does feel like we’ve overshot.”