"This year's apricot campaign is much better than the previous one"

Fruits de Provence has completed its cherry campaign: "The cherry season was average since we had many small sizes. But despite the wind episodes that can sometimes harm the fruit by making it ripen faster, the quality of cherries this year has not been impacted.

The apricot season has been underway for a good month and is going much better than the previous season: "For the moment, we can say that it is a good season. In terms of production volumes, we expect to reach 400 tons this year, whereas last year we were at about 150 tons. In terms of quality, we are also very pleased. Some plots had a bit of hail a month before starting the harvest, which slightly impacted the visual aspect of some fruits, but overall we are doing well. The sunny spring that we had allowed us to gain in precocity, which was an asset for the marketing. Last week's heat wave has pushed us to irrigate a little to help the trees get through the heat and to encourage the fruit to be ready for the next season. After all, we haven't had any rain for two months, except yesterday with only 9mm. As for the prices, they reflect rather well the quality of the goods we offer. 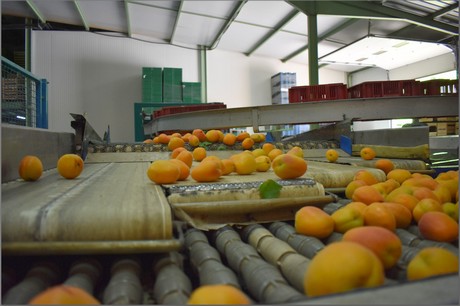 Fruits de Provence sells apricots mainly on the French market, to supermarkets, wholesalers, and retailers. The pear and apple campaign will follow the apricot campaign.