"Dutch and overseas eateries are the biggest fennel buyers"

Yesterday, the Dutch cooperative, ZON, began auctioning fennel in a new box. That falls under the Oude Meesters line, which includes bell peppers, eggplant, and rhubarb. "Last year was one of the worst fennel years. You could even say fennel's become a forgotten vegetable. Reason enough for us to sit down with the growers to see where the market opportunities lie and what we can do to improve the situation," says Product Manager Leander van de Griend.

"Our evaluation showed that fennel is genuinely a typical hospitality product. Proportionally, most go directly or indirectly to Dutch and overseas eateries. Fennel is also still well used in the ready-to-cook sector and fresh food packages. But, it doesn't sell well at all separately at retailers." 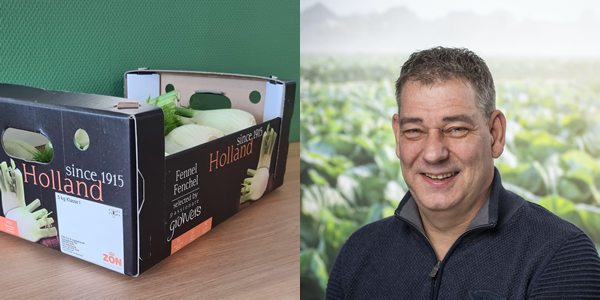 "We decided to position the fennel as a true hospitality product. But, our hospitality clients were saying they don't really like the wooden box. Most of them have trouble with the staples and splinters. Packaging should, obviously, never be an obstacle," Leander explains.

"We thus started working on a new box. We carefully considered which box presents the product best and offers it the best protection because the fennel has to travel all over the world. That led to this moisture-resistant box with a cover sheet in our Oude Meesters line."

ZON has considerably less fennel acreage than in other years. "Many fennel growers cultivate another crop, often asparagus, alongside it," Leander continues. "They begin growing fennel after the asparagus season. Several of our growers used to focus on the early segment. But, Italy still has large volumes on the market then."

So, prices aren't nearly what they used to be. We, therefore, start quite late now, only around week 24. That's been a good decision. By then, most of the import fennel is off the market, contracts are starting up again, and many clients are switching to Dutch products," Leander concludes.