Europe
In the wake of the corona crisis, the European market was on the road to recovery last year. However, the aftermath of this crisis is still being felt. As is the case post-Brexit, with import restrictions leading to large reductions in exports of basic seed potatoes from the Netherlands to the UK.

Ukraine
The war in Ukraine is also having a major impact on agriculture. Such as sharp increases in prices for sunflower seed, rapeseed and wheat. As a result, European farmers decided to grow more of these crops and fewer potatoes, which seriously affected the demand for seed potatoes from the Netherlands in March and April.

Gerard Backx, CEO HZPC: ‘First of all, the war in Ukraine causes human suffering. As HZPC it is our mission to contribute to food security. That is why we decided to deliver both seed and ware potatoes from a number of European countries to Ukraine ‘for free’.’ Only a limited volume of seed potatoes was exported for payment from the Netherlands to Ukraine this season. 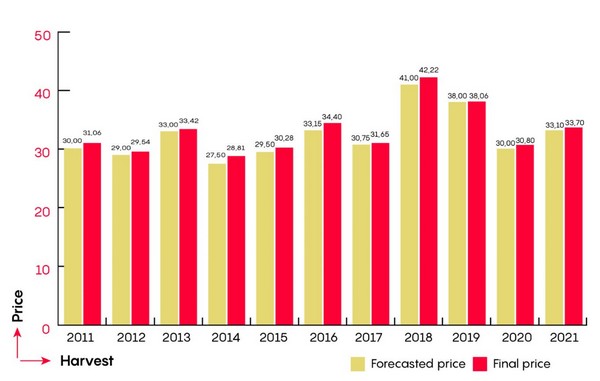 Respectable price
Martin Jansen Klomp from HZPC explains the final price: ‘We are facing many external circumstances, and often extreme cases, such as the war in Ukraine. This impacts sales. The fact that prices actually rose slightly despite these factors is partly down to a significant contribution from alternative sales channels and certain costs being lower than budgeted. Thanks in part to the good quality of the seed potatoes, the number of complaints was significantly lower than we had estimated at the beginning of March. In the end, even when you compare final prices over the past ten years, the 2021 prices were definitely respectable. And that is important for our growers. After all, without growers there is no HZPC.’