The current Dutch onion export season is drawing to a close. With six more weeks to go, export figures still look good. Something truly crazy would have to happen for Dutch onion exports not to break last year's record, says Holland Onions. Last season, the fabled export barrier of 1.2 million tonnes was easily passed; this season, too, exports got off to an early start. This season's onion exports through week 21 stand at over 1,218,000 tons, and there are 132 actively importing countries.

In the same period of the 2020-2021 export season, 1,136,000 tons were sold abroad to 128 countries. Exports have, therefore, grown by seven percent. That is despite major outlets like Bangladesh and Sri Lanka being completely out of the picture this season. That is entirely due to India, Dutch onions' greatest competitor, regaining that region's market share. 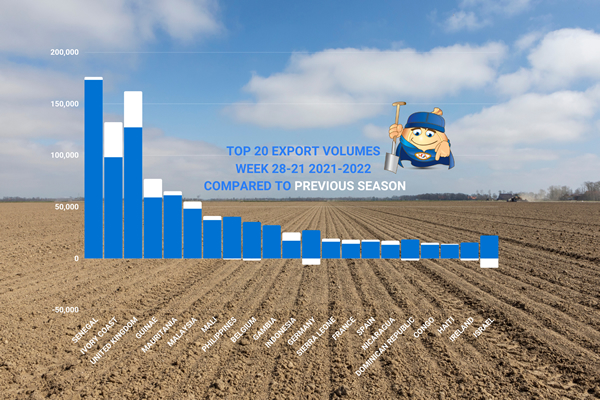 Imports will, thus, remain necessary when there are no local onions available. Other big volume gainers are Indonesia and Nicaragua. Exports to the latter country stabilized at over 16,000 tons this season. Indonesia grew quite steadily to almost 25,000 tons. Central American neighbors, El Salvador and Honduras are also well in the picture.

Youkoso Japan!
In Asia, there were noticeably far more exports to Taiwan and Hong Kong. This season, Taiwan's imports suddenly went from 16 tons to more than 7,600 tons, putting it in the top 35. Hong Kong rose to 49th position; its exports jumped from 774 tons to 3,500+ tons. That places it just below Singapore, which also shows steady export growth. And then there is this season's big surprise - Japan. It seems Japanese cooks appreciate Dutch onions. From a somewhat meager 400 kilos, exports to this sizeable Asian island leaped to over 2,200 tons.

Significant growth closer to home too
This season, Dutch onion exports to Great Britain grew anew by almost 40%. The counter has already reached nearly 132,000 tons. Part of this increase is explained by more accurate registration because of Brexit, which changed the UK's status to a so-called 'third country'. This season 36,000 tons (+40%) more already went across the Channel; that is 45,000 tons (+60%) more than at the same time last season. The British are half self-sufficient for their domestic onion consumption of about 670,000 tons.

But that country is also quite dependent on imports. Apparently, Dutch onions manage to snatch market share from other suppliers such as Spain, Egypt, New Zealand, and Poland every season. The same is evident in France, where they imported more than 18,000 tons of 'Oignons Hollanda's versus last season's 14,000 tons. Besides Dutch onions, some nationalistic French buyers specifically want French onions. These go to Dutch sorting facilities but are not in the export statistics.

Poland, too, showed good, stable growth figures again. They also get a considerable amount of Dutch field onions, which also do not appear in the weekly export figures. What is undoubtedly striking in the statistics is the enormous export growth to precision country Switzerland; from 600 tons in the previous season, the counter stands at, at least 2,500 tons this season. Neither should Finland be left off this list, with growth from 3,200 tons to over 5,300 tons. These volumes may not be in the top ten, but the Dutch saying, "Don't dishonor the little guy," applies.

Ukraine
Ukraine has been importing Dutch onions for some time. Last season, however, those seemed to be halved compared to the previous year. This year, although the country has been under siege since February 24, exports are picking up and have been showing significantly higher weekly volumes. A total of 6,800 tons of Dutch onion imports puts the country in 36th place.

Vietnam and Colombia open again
Two countries have reopened their borders to Dutch onions after a long time, and both offer perspective for the coming onion season. Colombia could be a particularly significant buyer should regional harvests fail. This Latin American country sometimes used to purchase more than 10,000 tons.

It was, therefore, a very welcome client. There was good cooperation between Holland Onion Association, agricultural councils, and embassies. That and in-depth discussions convinced the Vietnamese and Colombian governments to open their borders again for the widely praised Dutch onions with their distinctively yellow peel.