The open ground bell pepper production is recovering in the Spanish region of Murcia after having been reduced by about 30% in the first part of the campaign due to the impact of bad weather in the early spring.

"The abundant rains and cloudiness in the months of March and April took a toll on the flower setting, causing the bell pepper harvest to be reduced by approximately 30%. However, since last week, we have been getting back to the usual volumes," says Angel Izquierdo, director of the Murcian auction Soltir. 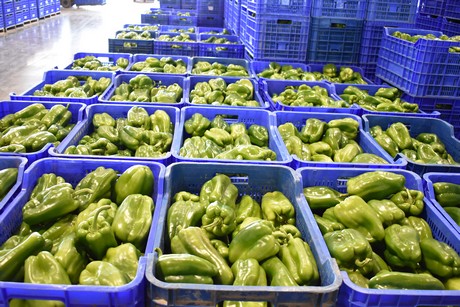 Almeria finished later than usual, and, although there was an overlap with the start of Murcia's campaign, there was no oversupply in the market. "Almeria's production has remained available throughout April, although this has been positive and complimentary for us, in view of the low supply. It has been, so far, a campaign with many ups and downs. There were times when green peppers were more expensive than red peppers due to the shortage in Almeria. The high prices of the Dutch production have prevented it from competing with us in our present markets. This week, the Dutch supply has been reduced, but it will surely rise in the next two weeks," says Angel Izquierdo.

Due to the drop in volumes, prices have so far averaged over 2.5 Euro per kilo at auctions, with peaks of over 4 Euro, although the latter was reached at times when there was hardly any supply.

"Although these may seem very high prices, the lack of production and the increase in production and packaging costs have continued to reduce the profit margins this year, causing the link in the chain between producers and retailers to lose money. The large retailers are not willing to adapt their prices to the circumstances of this campaign," says Izquierdo.

Murcia's bell pepper campaign is expected to end in August, earlier than usual, due to the recent ban on 1,3 dichloropropene for soil disinfection in crops such as bell peppers or strawberries. "With this disinfectant being banned, we will have to resort to the soil biosolarization technique, authorized until August, so the bell pepper campaign will be shortened."