After two years of conducting business via virtual meetings, the AIGN® organization gratefully assembled for an in-person conference of its members the last week of May in Honolulu, Hawaii. The extensive meeting agenda commenced with the formal presentation of newly joined member, Seven Star Fruits Pvt. Ltd. The addition of Seven Star Fruits brings the number of member-companies in the thirty-four-year-old tree nursery association to eleven, and incorporates representation of another significant growing region, the country of India. 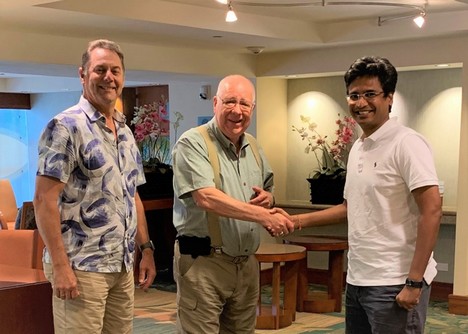 Seven Star Fruits, based in Mumbai, Maharashtra, is the horticultural division of Mahyco Grow Pvt. Ltd. Mahyco Grow, founded in 1964 by Dr. B.R. Barwale, is dedicated to the development of the agriculture industry in India through innovation. Its subsidiary, Seven Star Fruits, focuses on two primary activities: Nursery and Fresh Produce management. The company will be represented on AIGN®’s board of directors by Mr. Aashish Barwale. Aashish received his undergraduate degrees in applied economics and plant science from Cornell University, followed by an MBA from Harvard Business School. For more than a decade, he has worked in the agricultural sector in India focusing on research to make India more self-sufficient in agriculture production. Mr. Barwale was introduced by AIGN® board Vice President and CEO Dr. Gavin Porter who stated, "AIGN is excited to welcome Seven Star Fruits as its latest AIGN member. As our company continues to build on its successful global IP management reach, new members like Seven Star Fruits in India are key to this expansion by bringing the same IP management and variety commercialization skills from their territory onto our global stage. We look forward to working closely with Seven Star Fruits in our development of new proprietary varieties."

After the introduction of Seven Star Fruits, the group quickly got down to the business of completing a review of all new and ongoing AIGN® projects as well as receiving status updates of the joint ventures they participate in with other breeders and commercializing companies. This included a report from long-time AIGN® partner, Prevar Ltd. of New Zealand, who reported on their line of hybrid pears as well as some newly released apple and pear cultivars which are currently being circulated for first stage trialing within the AIGN® network. Board president, Mr. Lynnell Brandt brought the 4-day annual meeting to conclusion by expressing gratitude to the board and management for a successful meeting and the opportunity to renew relationships in person once again.