France: national campaign to promote organic products: “For us and for the planet, #bioréflexe”

94% of the French claim to be familiar with the AB label and to trust it (91%), but it is estimated that half of the French population is not sufficiently informed about organic products. In the face of these observations, the French “organic team”, launched on March 3rd at the International Agricultural Show and composed of Agence BIO, La Maison du Bio and the interprofessional organizations Cniel, Cnipt, Cnpo, InterApi, Interbev, Intercéréales, Interfel, Synalaf, Terres Univia, has organized the first large-scale campaign for the general public to make organic products a part of the daily life of the French. The campaign started on May 30th. 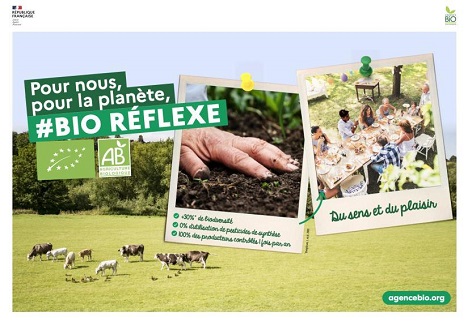 Historic collective campaign initiated by Agence BIO
This campaign is an unprecedented demonstration of support towards the development and promotion of organic farming in France. It is the first time that an action of this magnitude has been deployed to raise awareness among the French about the benefits of organic farming for mankind and for the planet. Agence BIO was able to mobilize all the players of the organic sector around this major project so that each sector could be heard and supported. This collective campaign represents more than 1 million euros [1.07 million USD], a first in the history of organic farming in France. For the occasion, the French Ministry of Agriculture and Food Sovereignty has allocated an exceptional budget to Agence BIO, in addition to the exceptional budgets of CNIEL, Interfel and La Maison du Bio.

“For us and for the planet, #bioréflexe”, an active slogan that reminds us that consuming organic products helps preserve our planet
The French “organic team”’s ambition is to engage consumers in order to remind them that consuming organic products helps preserve the environment and biodiversity. Consuming organic is a sustainable and respectful approach to life. Each organic product purchased allows a return on environmental investment. #BioRéflexe is a citizen’s commitment to change its consumption habits and the goal of this campaign is to gather the French around this slogan in order to accelerate the ecological transition.

A campaign combining organic and tasty
In order to put an end to the preconceived ideas about organic products, the campaign is also a reminder that organic products are a source of pleasure, sharing and conviviality. Agence BIO wanted to illustrate this campaign with 7 easy recipes, affordable and seasonal, to introduce organic products to our daily lives. Consumers are invited to make beetroot hummus, a sweet-and-sour fruit and vegetable salad, apricots with honey and more! Thibaut Spiwack, a committed ambassador, is accompanying this culinary campaign and sharing his advice. He opened his own restaurant, ANONA, in 2019, where he combines his ecological principles with his love of gastronomy. Since the opening, he has not gone unnoticed. He has even received several awards and he was among the first 50 chefs to be awarded the Michelin green star. His restaurant has been recognized by the Ecotable label for its exemplary practices in terms of sustainable dining. In 2022, he was one of the favorite candidates of the 13th edition of Top Chef on French TV M6.

A multi-channel campaign to raise awareness
Produced by Mediapilote, this campaign will be rolled out nationwide from May 30th until the fall of 2022. It will include banner and DOOH advertising, radio and data shopper activation to raise awareness among as many people as possible. Photographed by renowned culinary photographer Émilie Laraison, the poster campaign honors organic products by making them look beautiful.