Are we headed towards an early peak season?

Everyone is extremely focused on the balancing act: demand dropping due to the Chinese lockdown and the resultant blank sailings, but then also the injection of new services over the past 12 months, combined with what will happen with deployed capacity during peak season.

According to Alan Murphy, CEO of Sea-Intelligence, adding complexity to this is the port congestion and congestion-induced delays, as well as fear over the union contract negotiations with the ILWU in the US, which makes an early peak season all the more likely for importers i.e. importers starting early and getting a head-start to avoid getting crowded out with delays in Q3.

Do we see any evidence of delays? 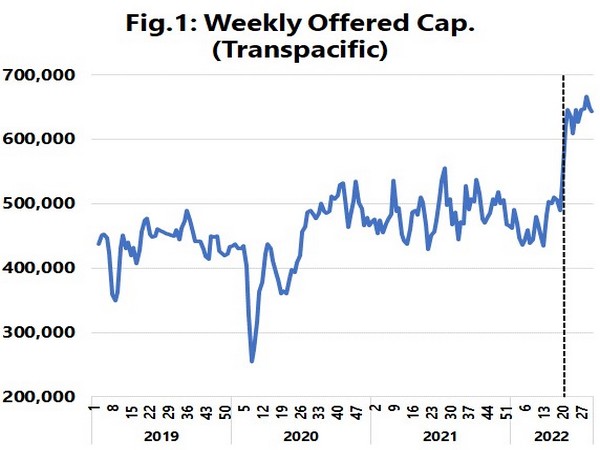 "We do see evidence of it, especially on the Transpacific. As we can see in figure 1, there is a sharp increase in offered capacity in the coming 12 weeks (weeks 20-31), with week 22 seemingly the magic number in terms of an increase. We see offered capacity increasing from 535,200 TEU in week 20 to 646,500 TEU in week 22. Capacity is slated to stay at that level all the way to week 31."

"If we look at capacity growth individually on the two Transpacific trade lanes, based on current vessel deployment, Asia-North America West Coast will see weekly capacity grow by a little over 10% in each of the upcoming 12 weeks when annualised over the respective weeks in 2019. This is a consistent level of growth in line with the growth seen during the peak season in 2021. On Asia-North America East Coast, capacity growth when annualised over 2019 is slated to be 11%-17% in the upcoming 12 weeks, which is stronger than on Asia-NAWC, but with a more gradual increase than on Asia-NAWC," explains Murphy.