"After 1,079 long days, we can finally meet in person again." That is how Luc Vanoirbeek kicked off the Belgian Horticultural Cooperative (VBT), Logistics and Administrative Auctions Association (LAVA), and the Expertise Center for Sustainable Horticulture's (KDT) reception. After the annual meeting, the evening was spent in 'old fashioned' merriment with guests enjoying a snack and a drink.

Not much was said about the AGM at the reception. But the many guests' delight at seeing each other again, after almost three years, was evident, and they had long talks. 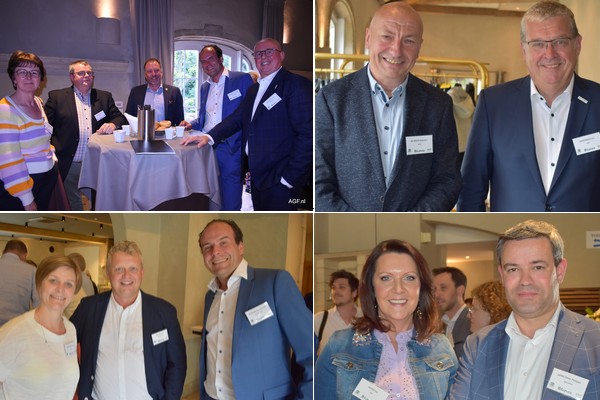 After the welcoming speech, Luc, VBT's general secretary, took the floor. "We have some catching up to do," he said, pointing out that it had been quite a while since people could gather. Those at the party took that advice to heart.

Guido Thys, well-known Dutch speaker, and critical thinker, then provided the gathering with a witty framework. In his presentation, he addressed the modern world, entitled 'Welcome to the 21st Century'. He says it is a changing world, which humans must embrace or eventually try to catch up with. A very challenging world for the fruit and vegetable sector and people in general. And humankind will have to face all those challenges.

In that world, value creation is crucial, and collaborations are becoming increasingly important to move forward. Guido used terms like 'seagull management' (a management style where people come swooping in screaming, make a mess of everything, and then leave again). And he left the audience with a quote from Darwin: 'The one most adaptable to change is the one who survives'. Guido, thus, tried to inspire the guests in a humorous way.

After the speeches, Luc invited everyone to the walking dinner, but not before expressing his disagreement with Guido on one point. "Change isn't always good. For example, I couldn't imagine a world where we would end a VBT, LAVA, and KDT AGM without a reception." And so it happened, as the party set the tone for the new year, one with plenty of things to come.