Encouraging start to the season in NRW:

The early potato harvest is 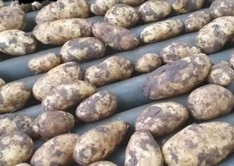 getting going relatively early this year in many growing regions in Germany. At the Lynders farm in Niederkrüchten (NRW), too, the first Annabelles (right) of this year's season were already harvested last week, some three weeks earlier than last year, says co-owner Hermann-Josef Lynders, who runs the company with his brother. "The yields are very good at the beginning of the season, and the same applies to the quality of our early potatoes."

The early produce is traded either through the farm's own store as well as surrounding direct marketers. Lynders: "From next week on, we expect larger volumes, and in about three weeks we will probably start with firm-skinned early potatoes of the Colomba and Corinna varieties." Parallel to the increase in volume, the product will then also increasingly reach food retailers via a regional wholesale partner.

Declining early potato production
The Lynders family grows potatoes on about 66 hectares, with early potatoes accounting for about 15 percent. "The trend for early potatoes is a bit downward, not least because of the costly cultivation process with fleece covering, which is not so profitable. And then there is the minimum wage increase. Nevertheless, we will continue to grow early potatoes, because it is an interesting niche," Lynders says, describing the longer-term trend. 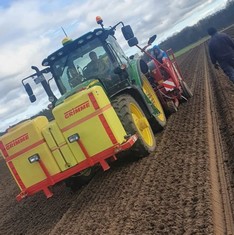 retailers continue to be supplied with stored potatoes from last year's harvest. For the next three to four weeks, there will still be sufficient goods available, after which the company will fully dedicate itself to the distribution of early potatoes. "It's difficult to predict how much customers will want to buy, but by mid-June our warehouse should be cleared."

Dropping prices for iceberg lettuce
In parallel with the early potato business, the harvest of open-ground vegetables - like lettuce, iceberg lettuce, oak leaf, lollo bionda and rosso and celery - is now gradually getting underway. "For iceberg lettuce in particular, Spain is pressing the market with cheap produce, which is why we are having to deal with falling prices. But that can change again within a very short time. Overall, however, we are quite satisfied with the current start to the season," Lynders concludes.