They have been called the 'king and queen of the coconuts'. Now that coconut king Hans van der Kooij of Jokofruit/Impex is saying goodbye to the fresh produce business after a career of 50 years - following in the footsteps of his brother Daan - and his children have no interest in taking over the business, N&K's queen of coconuts, Lorenza Ciccaroni, was immediately looked to as his successor. As of 1 June N&K will take over the activities of Jokofruit. Colleague Marjolein Elderkamp, who recently celebrated her 25th anniversary with Jokofruit, will also be joining N&K. 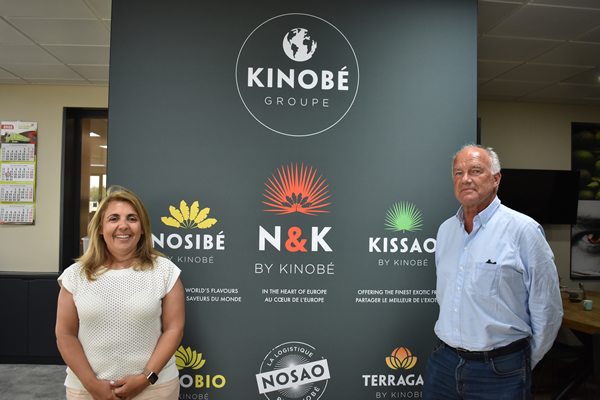 This marks the end of a long era for the van der Kooij family in the coconut business. Hans and Daan's father started importing fruit in 1958, and after a few years he was also among the first Dutch people to start importing coconuts. In recent years, the coconut business has become increasingly important, and Hans has been involved in the business for the last 50 years, although in the early years this was still in combination with his studies. Lorenza Ciccaroni took her first steps in the coconut business twenty years ago at what was then FTK and already had a lot of contact with Hans. "At that time we already had several joint suppliers and we have always kept good contact and respected each other's customers. For the customers, therefore, hardly anything will change."

Loyal, regular customers
And the specialisation in coconuts always pays off. "Coconuts may seem like an easy product, but they are definitely not," says Hans. "We are there for our customers, in good times and bad. Although I must say that in the coconut business we have never had wholly bad years, we have had bad periods. This was the case again in March, for example, when the containers for Russia entered the European market. Over the years, many importers have entered the coconut market, but many have come and many have gone. If they import at the wrong time, they often end up coming back to us to see if we have a market for the coconuts. In times of scarcity, importing coconuts sometimes seems very lucrative, but we are also there for the customer in a more difficult market. That became clear last year when the price of coconuts exploded and we continued to supply them at decent prices. If you take good care of your customer, they will also remain loyal to you. The strength of both Lorenza and I has always been that we have many loyal, regular customers." 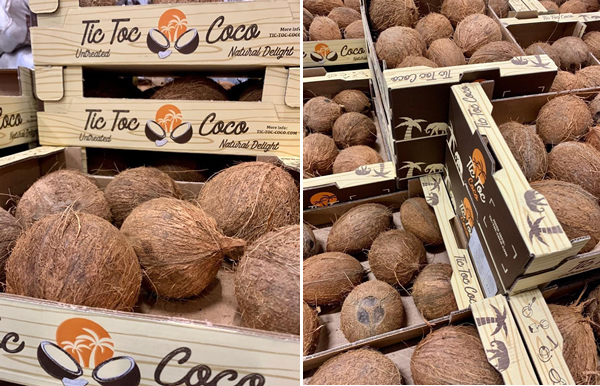 Lorenza is very positive about the consumption of coconuts. "Supermarkets, wholesalers and also cutting plants like to work with coconuts. Opening the coconuts is perhaps the only obstacle for the consumer. In the end, the coconut openers never really had a breakthrough. In the course of the years, you did see that it had a positive effect if the coconuts were recommended by, for example, a TV chef such as Herman den Blijker. The organic coconuts are also a growing category. They used to arrive on pallets, now they arrive in full containers."

The Covid pandemic only caused a short-lived drop in sales of coconuts. "For example, we have Italian beach bars in our customer base that sold much less the first month after the pandemic broke out, but those sales quickly recovered," says Lorenza. N&K, the Dutch import office of the French Kinobé group, sells the coconuts under its own brand, TicToc, among others, although according to Lorenza there are still many clients who repackage the coconuts themselves.

Ivory Coast has been the preferred supplier of coconuts to both Joko Impex and N&K in recent years. "In the past, we also imported from Sri Lanka and the Dominican Republic, but those countries could not compete with Ivory Coast in terms of price," says Hans, who remarkably has never visited his supplier in Ivory Coast himself. Over the years he has sold a considerable volume of Ivorian coconuts. "I remember very well that they used to arrive loose in the bale, so not on the pallet. The boys who were unloading the bales really did not need to go to the gym in the evening. We also imported coconuts from Vietnam, which arrived looking beautiful, but had a very short shelf life." 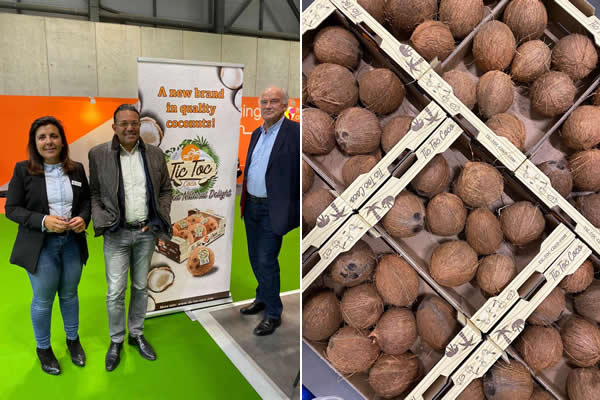 More businesslike
Hans has enjoyed the contacts with customers and suppliers over the years. "Many customers told me that there had never been any trouble over the years. I liked hearing that. It is a matter of live and let live. However, contact with customers and suppliers has become more business-like than before. Thirty years ago, you still sometimes went fishing with your customer. That has changed dramatically over the years. I have always enjoyed trade fairs enormously as well. I have never missed an edition of the Fruit Logistica in Berlin and have seen the fair grow from three halls to what it is today. I will certainly miss the trade, because I enjoyed doing my job every day. That does not apply to all aspects of the trade, however. I could do without the logistical problems of recent times. In the coconut business, we were never bothered by these, but nowadays delays are the order of the day."

"But I can hand over the business to Lorenza with peace of mind. If anyone had to take over, I'm glad it's her," concludes Hans. Lorenza calls it an honour to take over the activities of Joko Impex. "Coconuts are a product that suits us. At the start of N&K, we selected a number of products in which we want to be specialists and coconuts are definitely one of them. We look forward to the expansion of our business through the acquisition of Joko with great confidence. And I have already told Hans that if necessary we would be happy to call on him!"