"During long-term storage, the wheat is separated from the chaff"

The marketing of Austrian pome fruit is now in the middle of its second half. "Our current stock level is around 20%. Topaz in particular is currently very popular for export, as German stocks are now slowly running out. Accordingly, we are now starting a very important part of the season," says Andreas Kreuzwieser, Managing Director of Meleco Ltd, based in Pasching. The company has several locations and is dedicated to the cultivation and distribution of organic fruit from Austrian cultivation.

Thanks to the latest technology, such as long-term storage and the tried-and-tested water immersion process, the market-standard varieties can now be supplied twelve months a year. Market conditions this year have also been quite good so far, according to Kreuzwieser. "In the case of Topaz, we have increased prices somewhat, but still in a moderate plus. For Gala, marketing as well as pricing is developing a bit more evenly, especially since there is no dipping. So far, this variety has only been traded on the domestic market and we have been able to more or less maintain the solid price level at which we started. All in all, I would therefore call it a good season."

The assortment is rounded off by Braeburn, Arlet, Jonagored and Crimson Crisp, whereby only the marketing of Jonagored has already been terminated. Kreuzwieser: "The Crimson Crisp has been offered from domestic organic cultivation for about two to three years and shows unbeatable results in terms of shelf life. After nine months of storage, the percentage of table goods is about 95 percent, which in turn means that only five percent are not marketable after long-term storage. In years when industrial goods cannot be sold to cover costs, this is a decisive plus point. Crimson is picked early for Meleco. "We do not share the opinion that the apple can easily stay on the tree for a long time."

Harvest management and storability
The storability of an apple variety is extremely important to the Austrian organic expert, he said. "We are currently preparing for a very strong domestic organic harvest. However, the decisive factor is how the qualities then develop afterwards, because the wheat is separated from the chaff during long-term storage. There are usually enough apples until May, the question is whether there will then be enough good quality produce in the last phase of the season, June-July." There would be no significant overstocking of volumes into the next season in the organic sector - a difference from conventional events that should not be underestimated. "Every year is different, and that's a good thing".

In large parts of Austria, 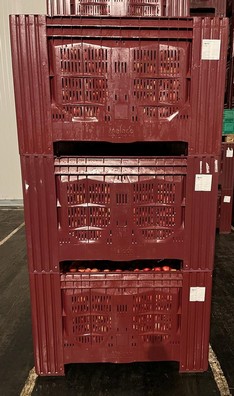 temperatures have been as high as 25-30 degrees in the past few weeks. Nonetheless, the flowers have mostly developed well. "If it is still hot in the fall at the beginning of the new harvest, it could well be tricky. At the end of the day, the decisive factor is harvest management and efficiency during transport and takeover, i.e. the goods must be harvested at exactly the right time and cooled down quickly. It remains to be seen to what extent the Ukraine war will affect us in terms of a shortage of harvest personnel. For the time being, however, we don't see any catastrophe coming our way."

Manageable electricity costs
According to Kreuzwieser, cost increases on the part of production must also be viewed in a differentiated manner. "Even though we undoubtedly have cost increases - it is important to look at supply and demand, because the decisive factor is whether the goods are cleared in a timely manner. On the part of long-term storage, I don't see crushing additional costs coming our way. Electricity will be more expensive, but only about 60 percent of electricity is used in the first three months after storage. Maintaining a low temperature is less energy-intensive than cooling down freshly harvested produce. Accordingly, I expect manageable additional costs in long-term storage. Of course, we have to keep an eye on all costs. But there's also little use in fretting about things we can't influence."